Common cuttlefish: chameleon of the sea 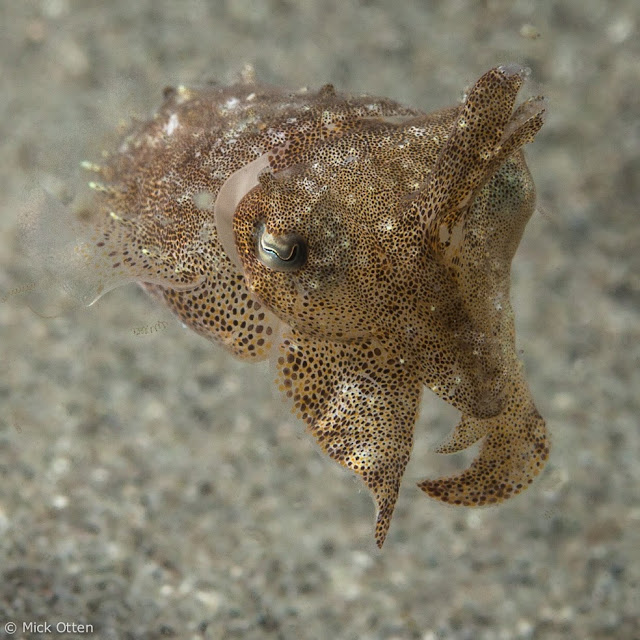 As promised in my previous post I would show and tell about young common cuttlefish, Sepia officinalis (NL: zeekat). 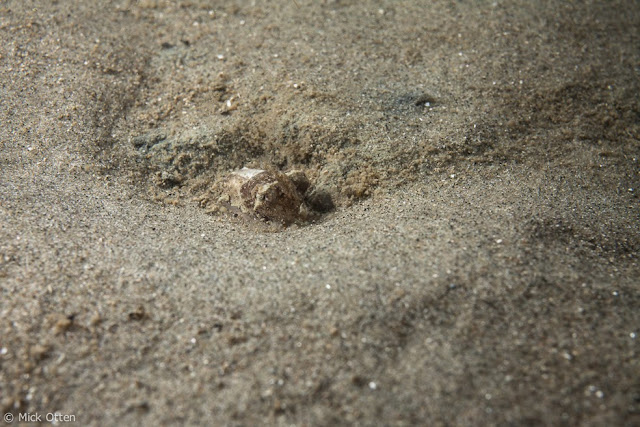 I found this specimen lying in the sand at Katshaven Zuid, August 23, 2012. It looks a bit like a piece of shell. Not as inobtrusive as I would expect of a vulnerable animal of about 15 mm long.

To prevent misunderstanding: the first 7 photo's of this post are of one and the same specimen! As you will read, they can change their appearance in seconds. That is why I put the time below each photo. 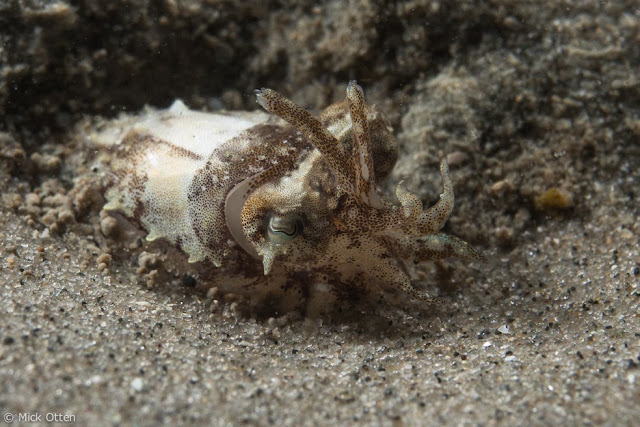 As I came closer the cuttlefish changed its appearance. In the two photo's above it became aware of my presence and it raised four arms. Usually two arms, which makes it look like an elephant raising its trunk (see the second next photo while he is taking off). But the one above is definitely in 'Quatroceratops' pose. 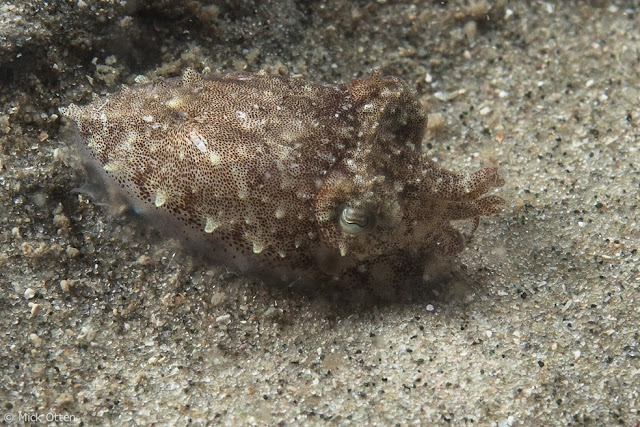 Some seconds later the 'collar' and the white patches disappeared and the arms were lowered. No disguise at all. They change their colour by means of what is called chromatophores: cells with little bags of pigment which they can expand or shrink. 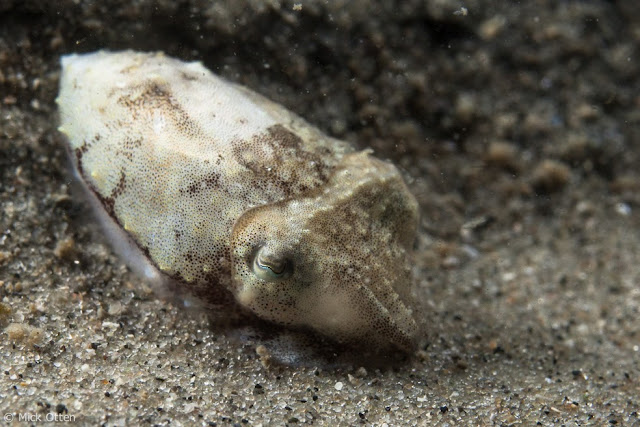 
Now with its arms closed, without the protrusions on its body and the colour of a bivalve shell, this is a much better camouflage.

Naylor (2005) about camouflage: 'If a cuttlefish swims off over a varying seabed, its shade can change instantly to match its surroundings, going dark over kelp-covered rocks and almost white over sand. The animal seems to calculate all the angles, apparently matching the seabed against which the observer is seeing it, rather than directly below it. ... To further improve camouflage, projections on the skin's surface will change its texture to replicate that of the surroundings.' 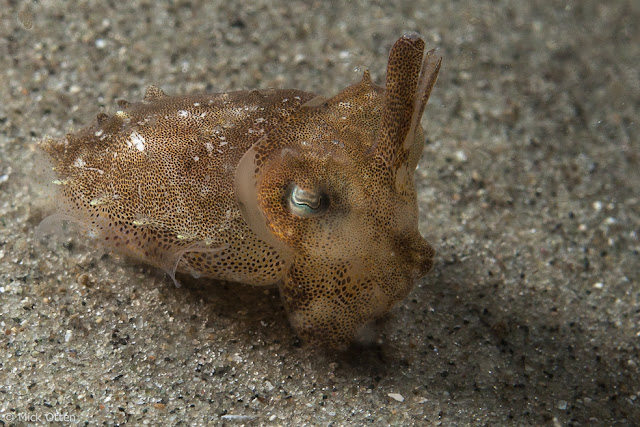 
The elephant pose. Was I coming to close? Did he knew his cover was blown?

I have seen young cuttlefish more often than adults. The first time was in 1986 when I found a bunch of Sepia's eggs washed upon the shore. I took them home and put them in my aquarium. After some days about 100 very cute cuttlefish appeared. Proper food was hard to come by in these days. Eventually (and sadly enough) only one specimen survived for almost four months.


I enjoyed them a lot. As little as they were, they had the same habits as adults. The cautious way they approach their prey and then the quick attack with their two much longer extendable arms. Sepia's have eight arms, but beneath those arms they are hiding these 'catch' tentacles.
And especially the tiny clouds of ink they spit out when annoyed. Charming and cuddly! 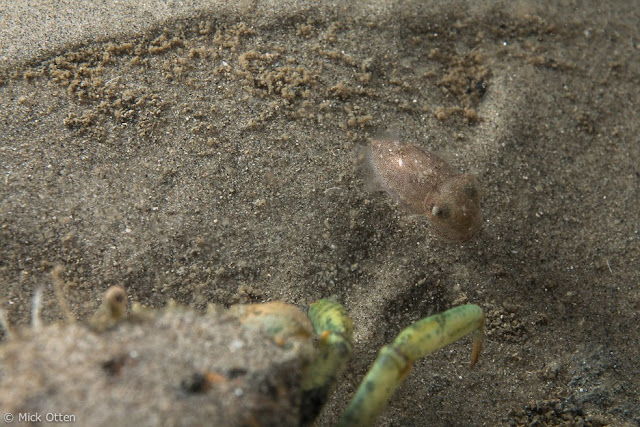 This photo shows how little the cuttlefish is. So small, it is easy prey for fish or - as could be but did not happen after I took the photo above - shore crabs (Carcinus maenas, NL: strandkrab). But it will not be for long, when roles are reversed and the shore crab is predated by Sepia.

The next photo's are taken at dive location Zeelandbrug, September 5, 2012. 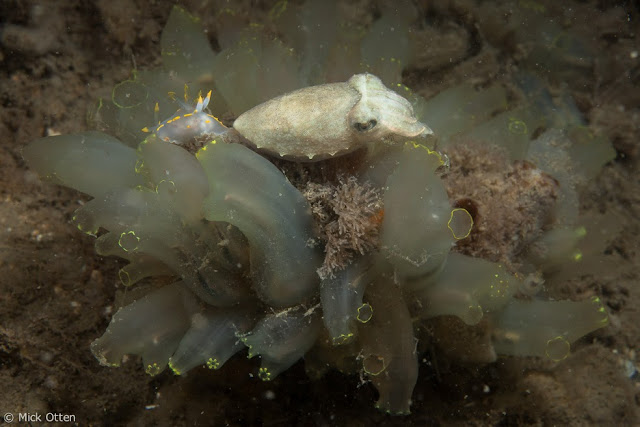 If it had not moved and hid between the yellow ringed sea squirts (Ciona intestinalis, NL: doorschijnende zakpijp) it was easily overlooked. But luckily it did move. 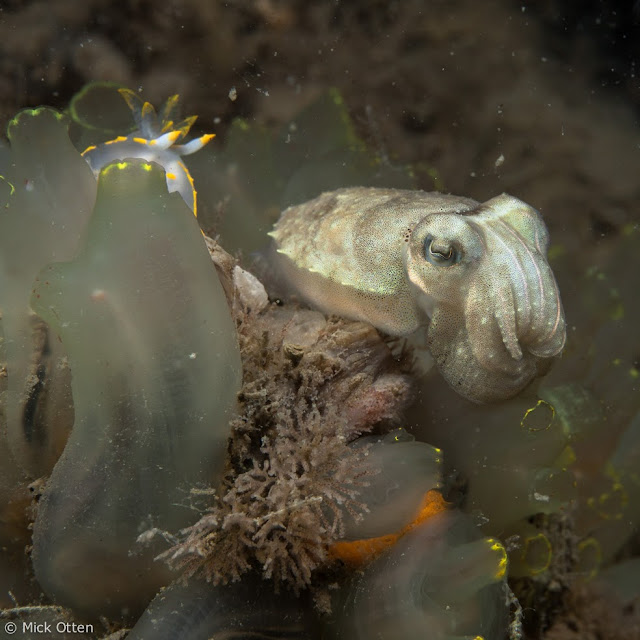 This is why we love young animals: their relative big eyes and head. And stocky build or is that only my preference?

Next to the cuttlefish is a nudibranch, a far 'cousin': the harlequin (Polycera quadrilineata, NL: harlekijnslak). It is a strange idea that snails, bivalves and cephalopods (like the cuttlefish) originate from a common ancestor. Albeit half a billion years ago. 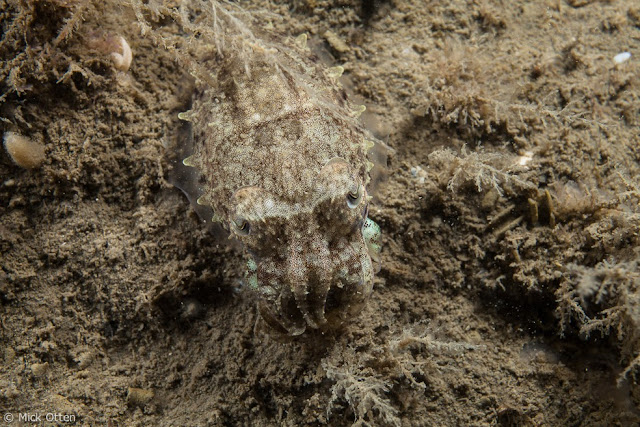 This was another specimen I found that dive. I was looking for small nudibranchs so I was focused for small animals (I usually am, partly because the water is not very clear and the only way to see flora and fauna is to come as close as possible). But on the rocks overgrown with hydroids, polydora worm-tubes, sponges and sea squirts this cuttlefish is easily overlooked. It was 36 mm long. 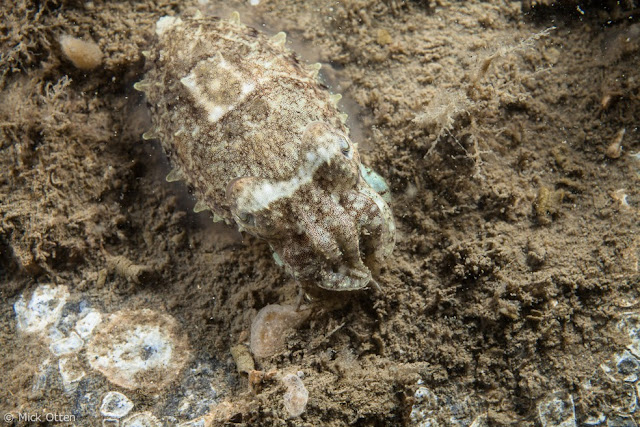 4 seconds later as it hovered a bit further, the surroundings changed because of the colour and pattern of the cement foundation of barnacles (bottom left on photo). And so the cuttlefish changed appearance.

Naylor (2005): '... cuttlefish use all sorts of patterns in an attempt to break up their outline and generally confuse potential predators. From hatching, young cuttlefish can display at least 13 types of body pattern, made up from over 30 different components.' The exact purpose is still unknown. 'Watching a cuttlefish flash through part of its repertoire is an awe-inspiring sight.'


'One of the most common patterns is known as the 'white square', which is accompanied by a white stripe on the head and a small white triangle at the rear.' Quick changing patterns and colours especially occur when these cuttlefish are hunting or are unsettled. Naylor (2005): 'They sometimes respond in this unsettled way with divers, but, at other times, appear unperturbed.' 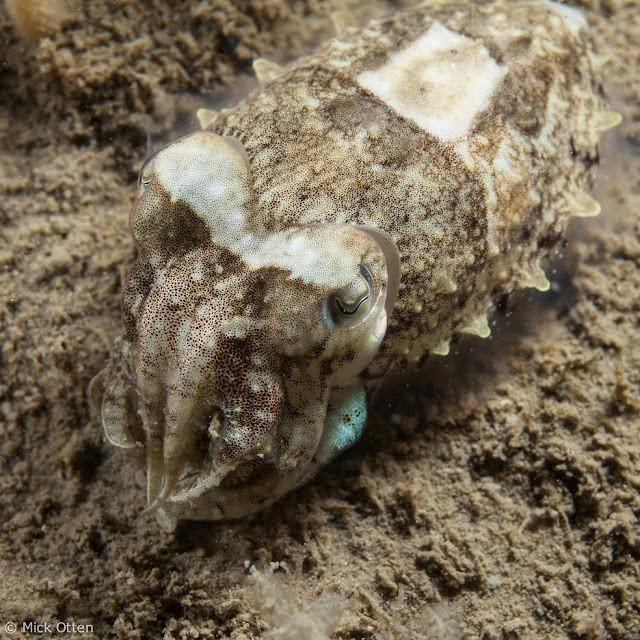 
A beautiful jade colour appeared on the outer arms...

In addition to adult cuttlefish in my previous post: The first living Sepia I ever saw was in 1976. I was walking with Jaap Engberts near dusk on a beach at Ambleteuse, France. There we found a big cuttlefish stranded on the beach. To our amazement it was alive, so we picked it up (I can't remember how; they are quite slippery) and put it in a big rock pool. It was a beautiful sight: its colour and pattern where changing in seconds, like fireworks. And he kept it changing for minutes. Then it slowed down and the zebra-pattern stayed static. The pool was deep enough, he could hide beneath a huge boulder and the water was rising, so after some time we left him alive and kicking. 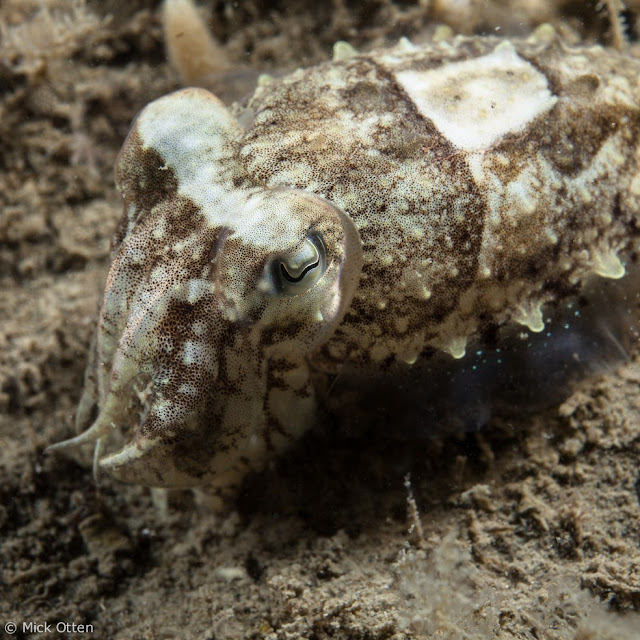 This Sepia was not shy at all: I took some live size photo's (1:1 magnification; that is why I am sure it was 36 mm long). So the front glas of my underwater housing was a few cm in front of him/her! Some time ago I wondered why crabs run away from me; I just did not realise how close the underwater housing is. 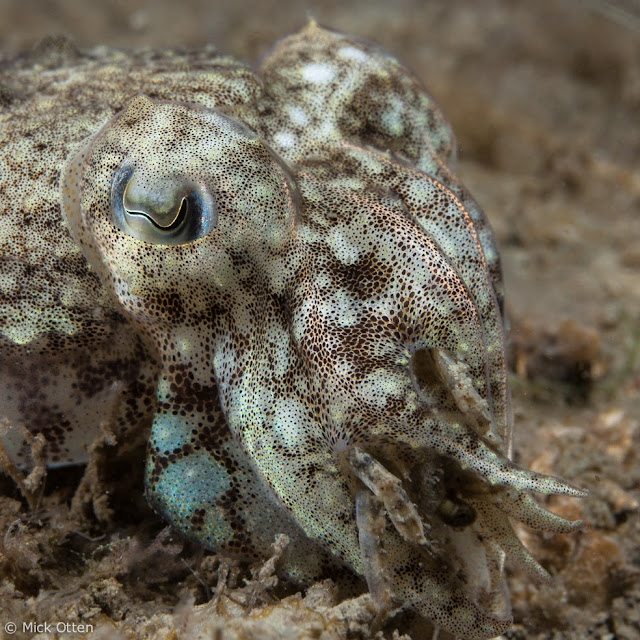 Have a close look at the beautiful eye and the colourful chromatophores. Norman (2003): 'Cuttlefish have a W-shaped eye, which when closed, forms two separate pupil openings.'


I was not aware at the moment I took the photo's, but this cuttlefish was just devouring an arch-fronted swimming crab (Liocarcinus navigator, NL: gewimperde zwemkrab). You can see its eye and two walking legs between the cuttlefish arms. 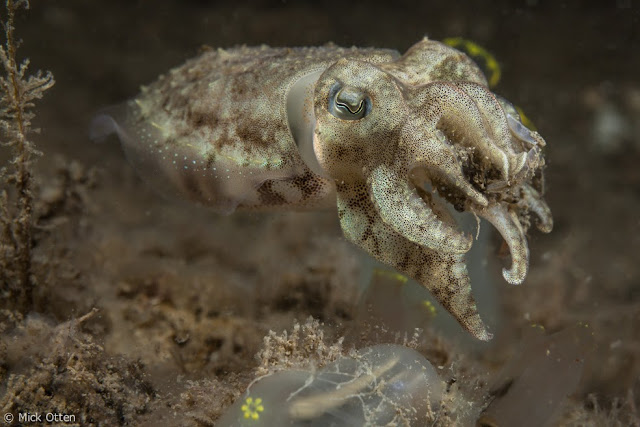 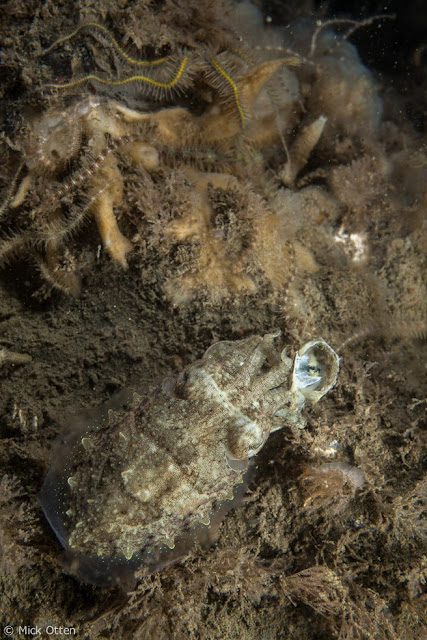 After a while he had emptied the crab and discarded the remains. You can see the crab's carapace (shield) beneath its arms. 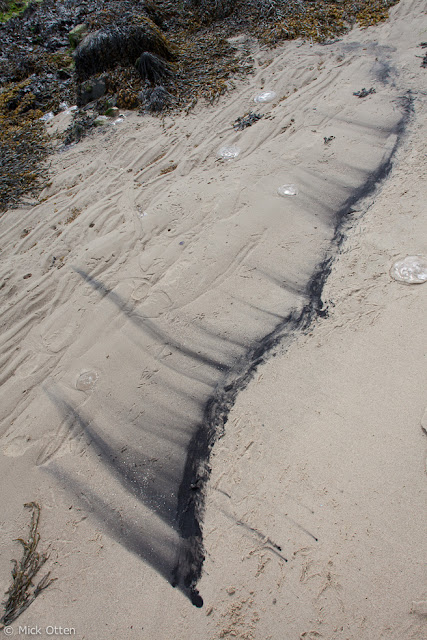 What has this and the next photo to do with this post? It looks like a crude Japanese ink-and-wash painting. It is ink from a common cuttlefish that was washed ashore at Jacobahaven (also Oosterschelde but not a diving spot) and was dragged away by a gull. The Sepia's ink bladder was ruptured in the process and left this abstract drawing on the sand.

Sepia ink was used for centuries to make drawings. These drawings fade away in a particular purplish brown colour. Hence 'sepia coloured'. 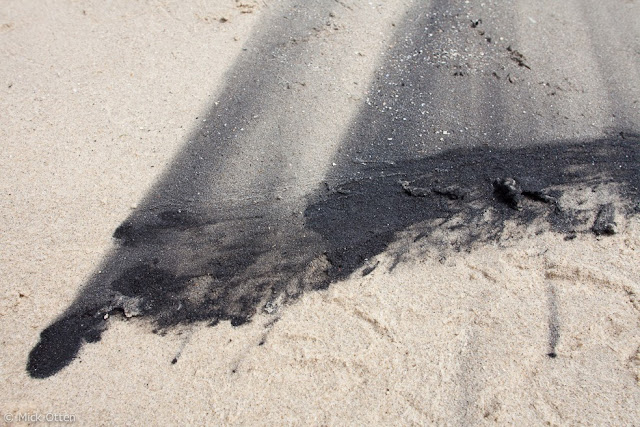 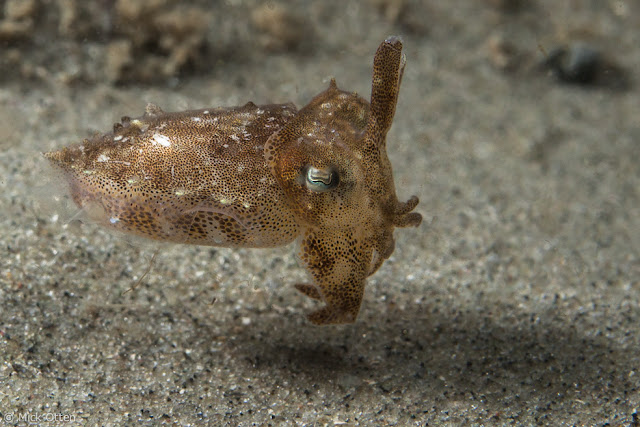 As you know by now, a Sepia can be a master in disguise: the chamaeleon of the sea. But I still don't know why it is sometimes so clumsily recognisable.
No comments: