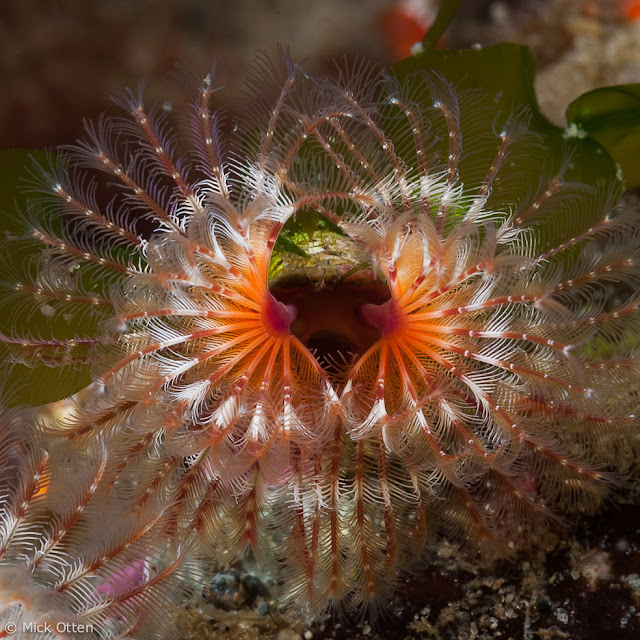 'Ugly' earthworms and nasty parasites. That is probably your first thought, when I mention worms. But  worms are a vital source of food in the sea and can be very beautiful. So far I have not described one single worm in my blog. Shame on me!

In this post I will show and describe a few beautiful and interesting worms, like calcareous tubeworms and feather-duster worms. The worms pictured in this post inhabit the jetty of Rock Bay, Vancouver Island, Canada (or otherwise mentioned), which I described in the previous post 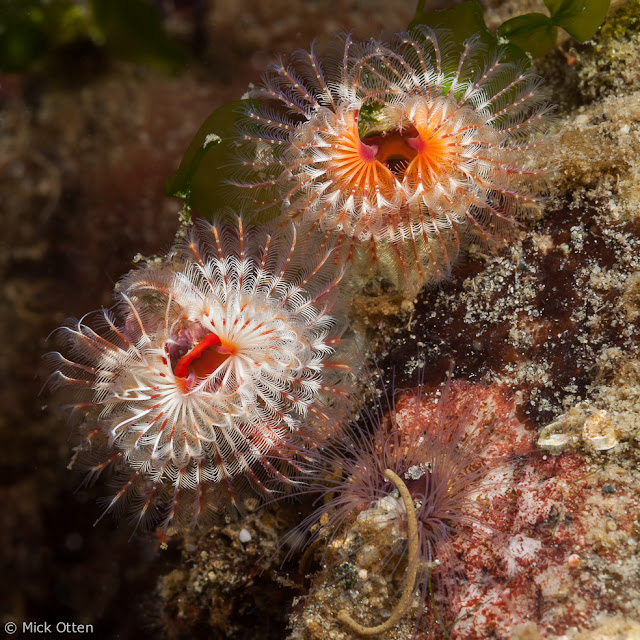 The photo's above and the one below show a Crucigera species. In this region there are two Crucigera species: C. zygophora, the yoke-bearer calcareous tubeworm, and C. irregularis. Unfortunately the distinctive differences between these two species are not visible on the photo's (and other photo's I took). Length up to 4.5 cm. 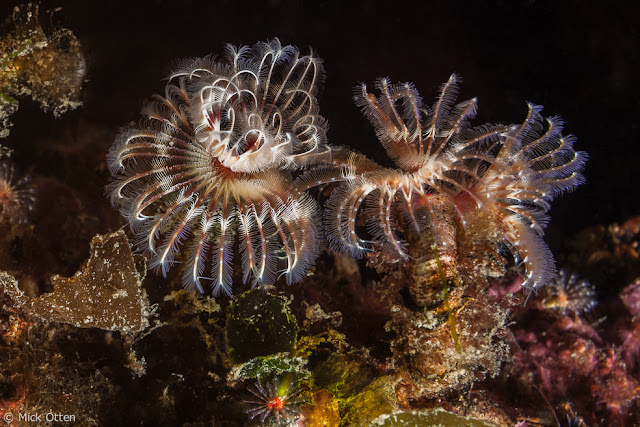 Worms are difficult to study. To begin with: what we call worms, can be animals of very different phyla. There are 13 phyla that include worm-like animals. The worms in this post all belong to the Annelida, in particular to the class Polychaeta, the bristle worms.

All Polychaetae are segmented animals. They are called bristle worms because of the many bristles on their parapodia: fleshy protrusions on each segment often used for movement. Hence their name: in Latin poly means many and chaetae means bristle = many bristles. 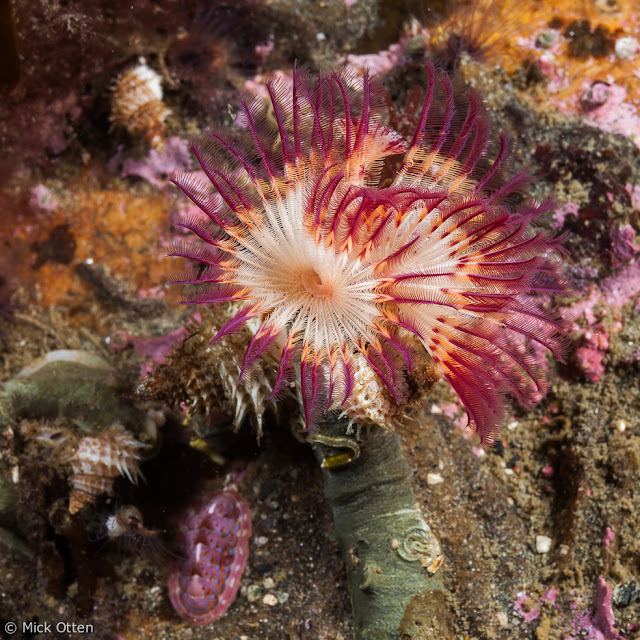 This is Serpula columbiana, the red-trumpet calcareous tubeworm. It forms, just as Crucigera, a tube made of calcium carbonate, mucus and carbohydrates. Length up to 6.5 cm. 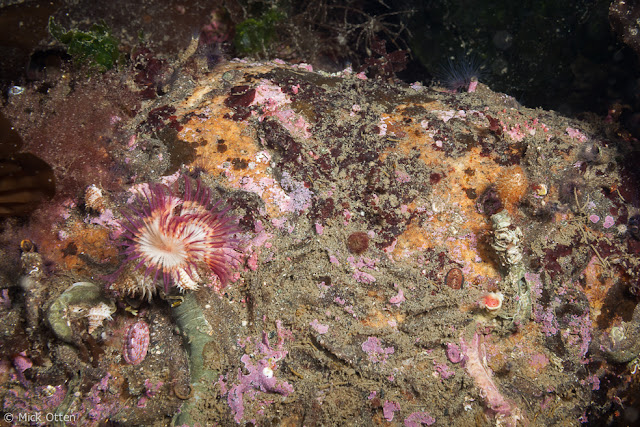 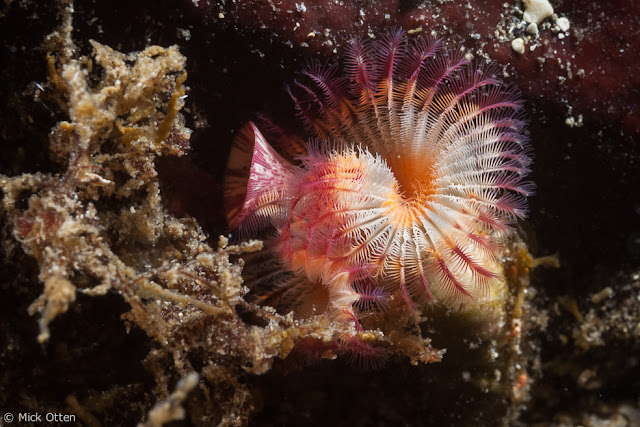 Both species of calacareous tubeworms have a trumpet like trap door, the operculum, to seal of the entrance of the tube against predators and if need be against dehydration. This trumpet like shape is easy to see in the photo above. 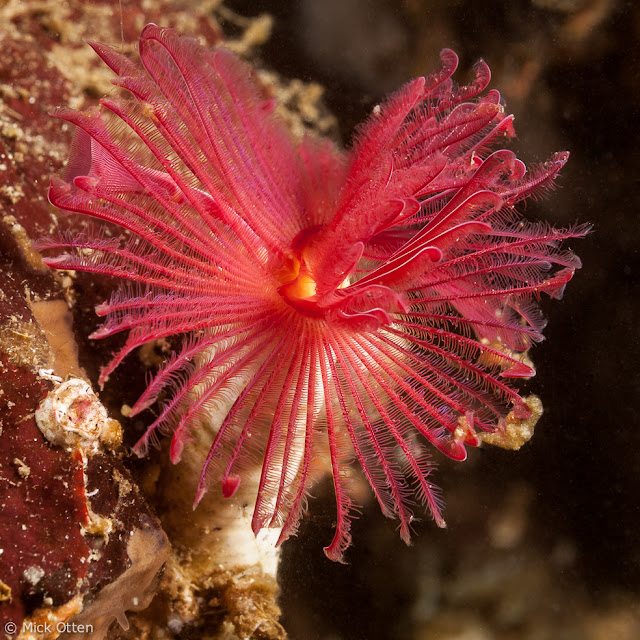 All the worms in this post have a crown of tentacles. These feather like tentacles, called radioles, are arranged in two spiralled lobes and are for feeding and respiration. 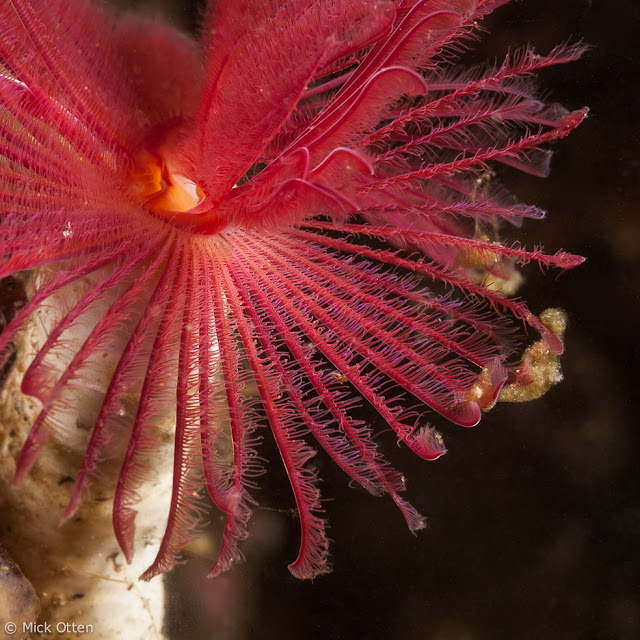 Close-up. The lateral branches of the radioles are called pinnules. 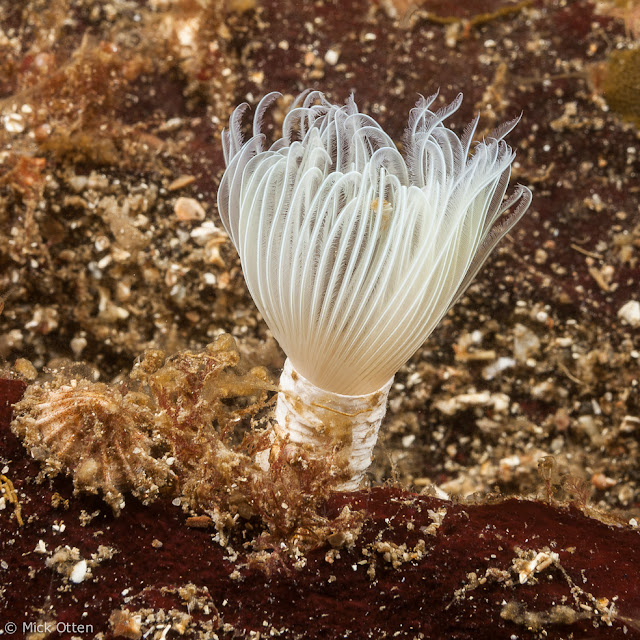 A white specimen emerging from its calcareous tube. 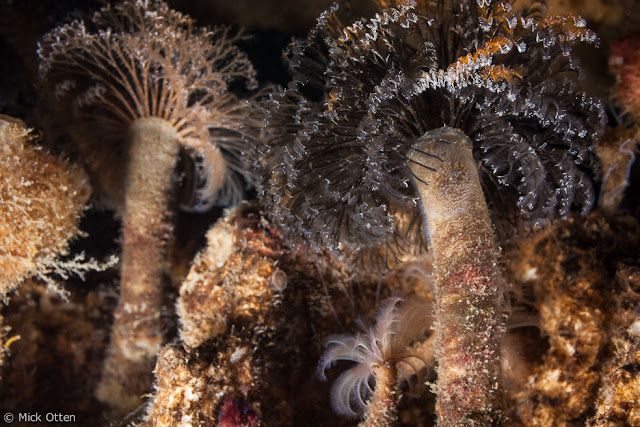 A lot of the photo's in this post are actually 90º or 180º rotated: in real life these worms were hanging upside down or tilted downwards. As I have a very strong preference to look at things from a 'normal' perspective, as most humans do, I rotated the photo's. 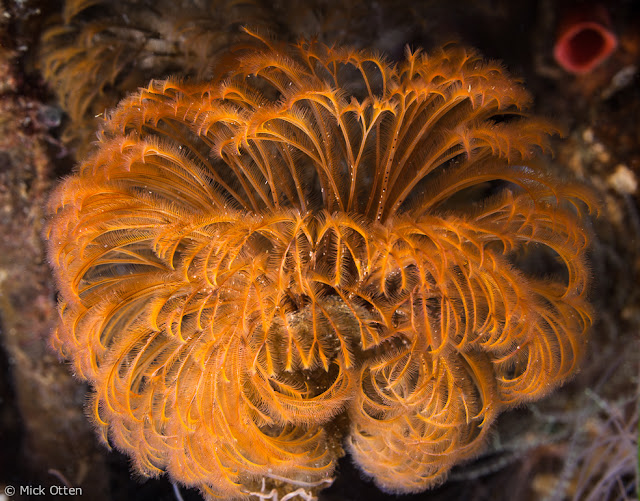 Beautiful crown of feathers. You can discern the dichotomously split feathers. The little blacks dots on the feathers are unpaired compound eyes. 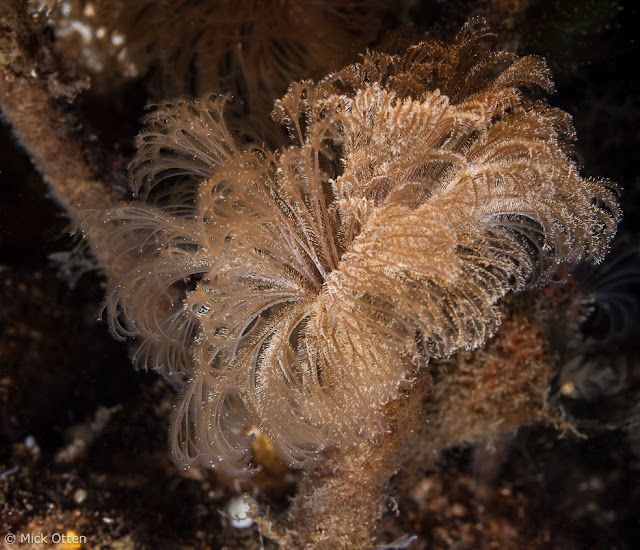 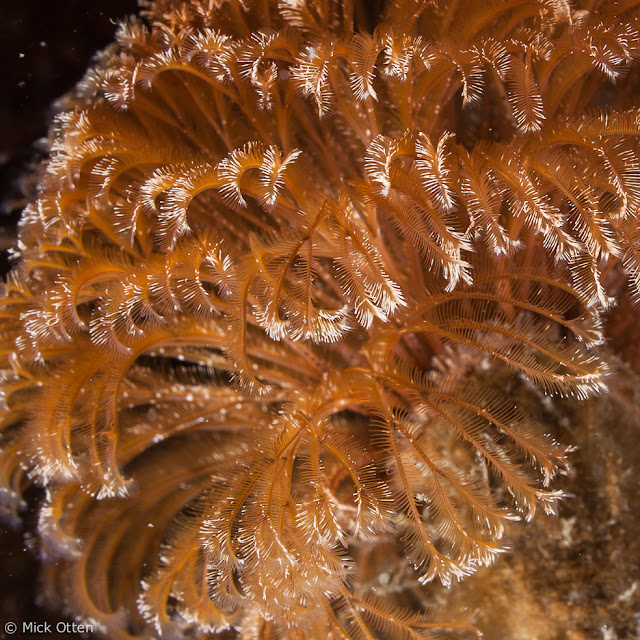 Some specimens have 'highlighted' feathers, like the hair fashion in the eighties. 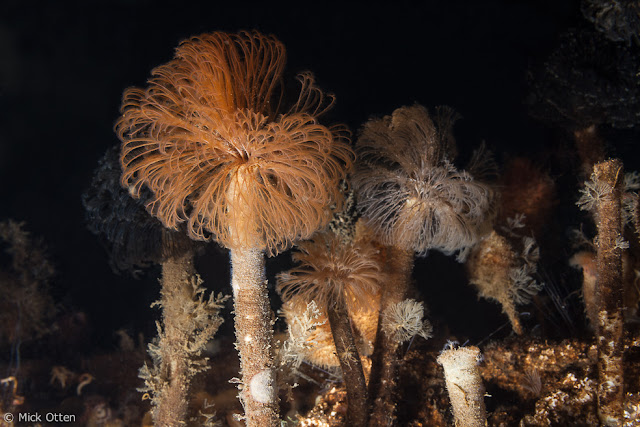 The jetty of Rock Bay is riddled with these beautiful worms! To quote the excellent book 'Marine Life of the Pacific Northwest' (Lamb & Hanby, 2005) about a 'nephew', the Vancouver feather-duster worm (see later): '...and records from the early 1920s estimated that large groves contained as many as 375,000 to 500,000 individuals.' Length up to 16 cm. 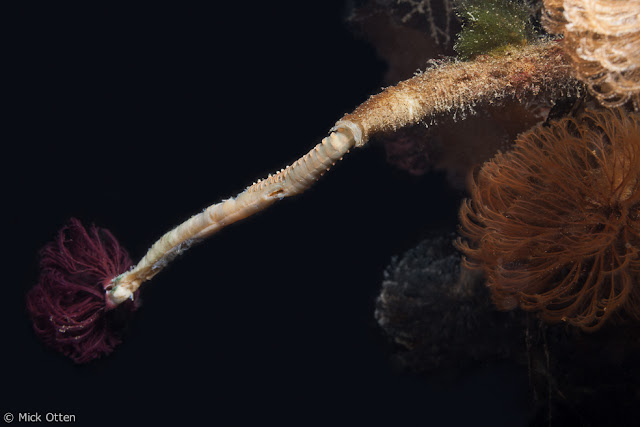 This specimen shows clearly that it is a worm. It was hanging from its tube and was clearly wounded. 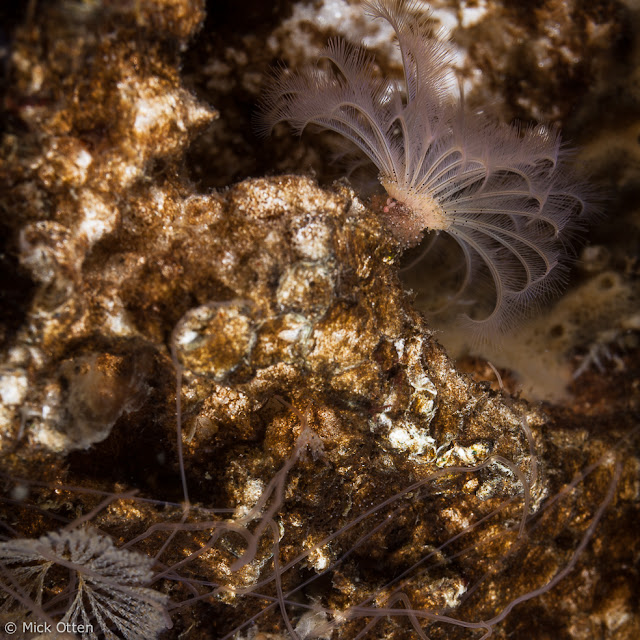 I found quite a lot of these smaller worms and I think they are young specimens of S. insignis. Again the eyes are clearly visible.

For these tube dwelling worms hard, rocky substrates are the preferred sites for attachment. The jetty of Rock Bay is made of styrofoam, the cream-white substrate on the photo. 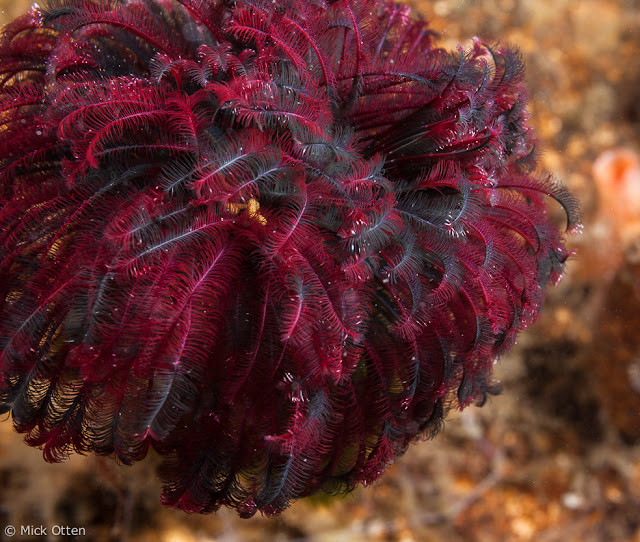 This is probably the Vancouver feather-duster, Eudistylia vancouveri. Its feathers are not branched and this is the common colour variety. However, a 100% identification is only possible by microscopic examination. 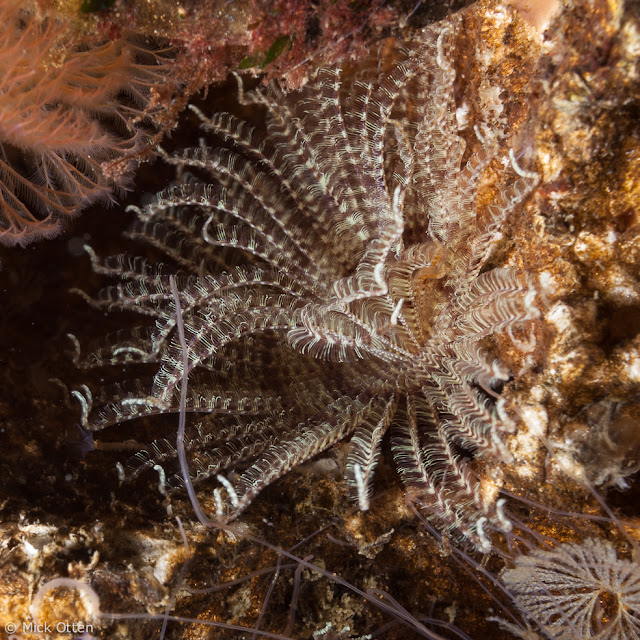 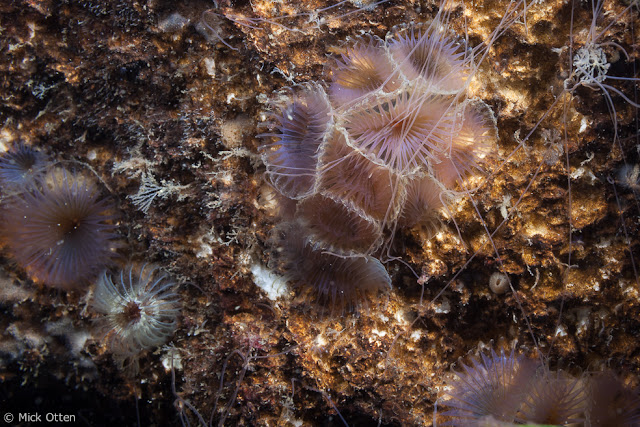 Myxicola infundibulum, the slime-tube feather-duster, lives communally in rock crevices (photo above; styrofoam jetty) or solitary in sand or mud (photo below). Length up to 20 cm (Carlton, 2007). 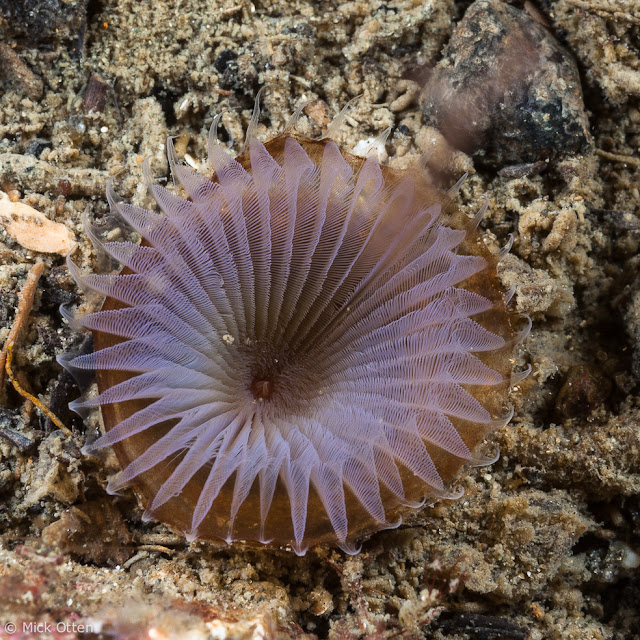 Distinguishing feature is the membrane connecting the radioles together over most of their length. Their tube is just mucus: no sediment, no calcium carbonate. 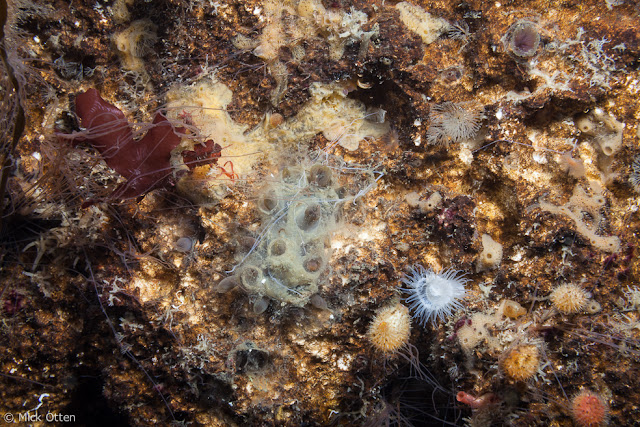 The worms readily retreat in their slime tubes when disturbed. The species is of European origin, but current investigations suggest that these local species are actually different from their European counterparts (Lamb & Hanby, 2005). I have seen Myxicola in Brittany, France, where it is quite common. 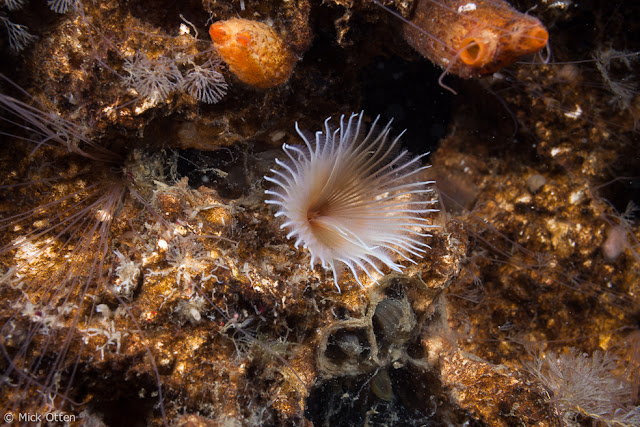 I found it far from easy to distinguish worm species. In a lot of cases you are forced to collect specimens: the distinguishing features are sometimes microscopic small and can not be seen on a photo, even when the worm is fully expanded. This worm (top and bottom) belongs to the subfamily Sabellinae. 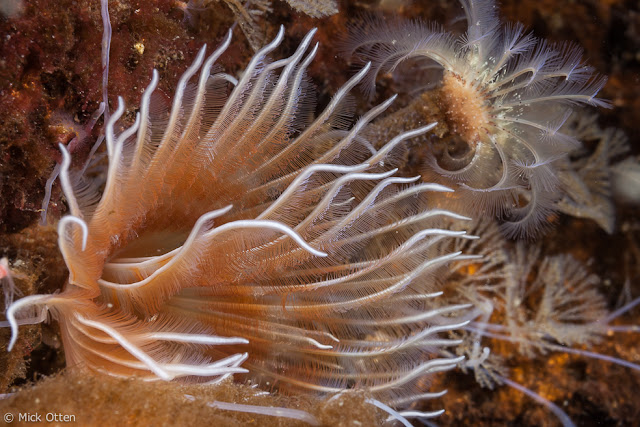 There are about 10,000 polychaete species described. Because of their often hidden, nocturnal and obscure way of living, as a marine biologist you can spend your lifetime discovering and describing new species!