Sepia frenzy: the common cuttlefish is back in town 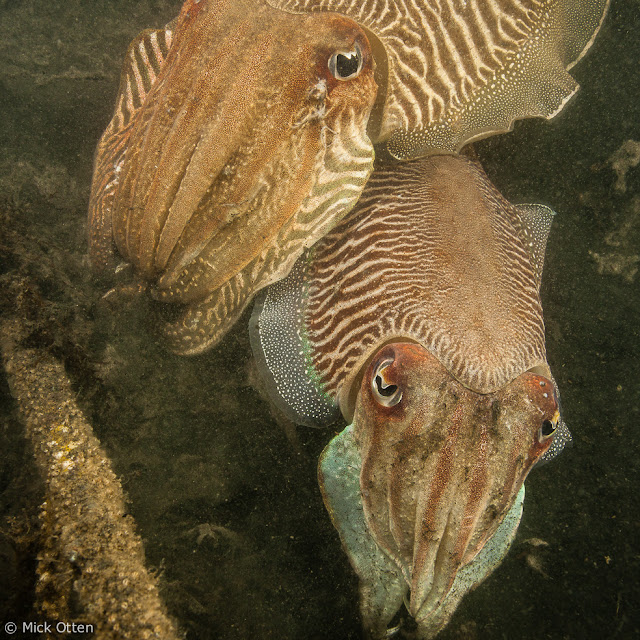 As the water temperature in the Oosterschelde, the Netherlands, is reaching 12º C, the common cuttlefish, Sepia officinalis (NL: gewone zeekat), who spends the winter in deeper waters, appears to spawn. The Oosterschelde is a heaven for these cuttlefish: it is an estuary and guarantees better protection against predators and rough seas. This year the cuttlefish' journey was delayed by a month (Van Bragt, 2013) because of the extending cold weather. 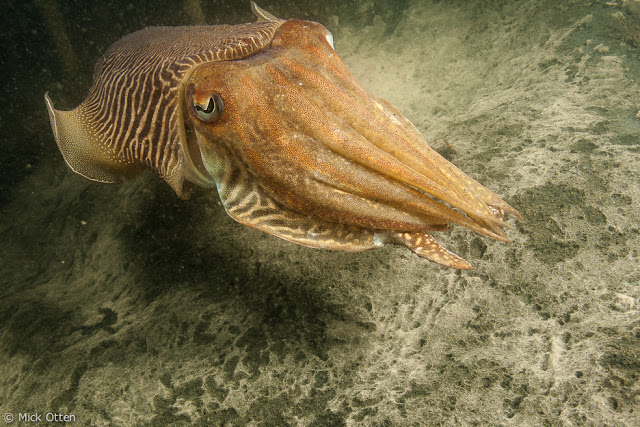 Not only the water temperature rises: also the body temperature of divers in the Netherlands (and Belgium and Germany). Sepia frenzy! From the moment the first cuttlefish is spotted, some divespots are crowded with divers. 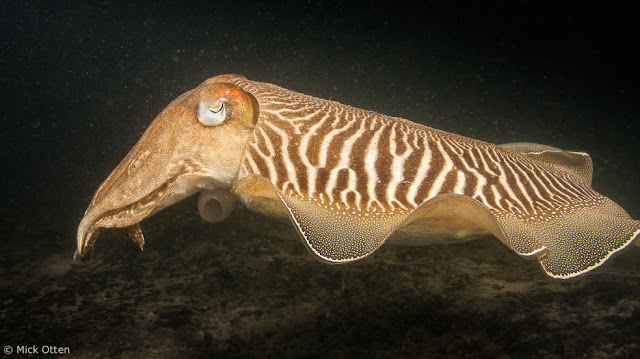 Let's be honest: the common cuttlefish is a spectacular animal. With their extraordinary eyes. With their quick shifting colours, patterns and texture. Their behaviour in the mating season and the way their mood shows in those colours, patterns and texture. And let's not forget the way they jet-propulsion (see the jet-funnel in the photo above) to quickly retreat or gently hoover above the bottom. 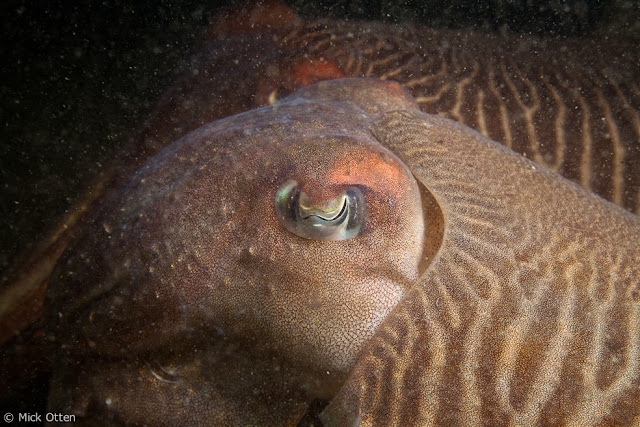 Since my buddy Ruud Versijde and I are diving together (november 2009), we never saw a common cuttlefish, how hard we tried. But in 2012 our persistence paid. We saw two adult cuttlefish at divespot Zeelandbrug. Unfortunately - and as usual - the water wasn't clear, but we could observe them and took photo's. Just 8 minutes.

That was all we were allowed to see. No mating behaviour, no female cuttlefish laying the eggs. But we were lucky to see (very) small cuttlefish at several divespots in the following months. More of juvenile Sepia's in the next post. 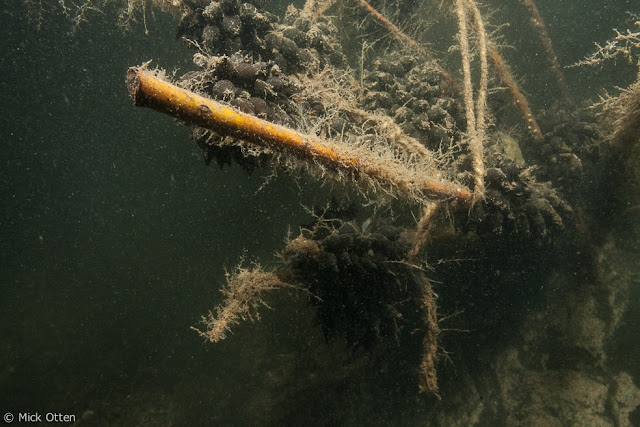 2013 was better. On June, 12 we went diving at Bergsche Diepsluis, also known as Oesterdam. All the photo's in this post (except two photo's with a mentioned location) were taken at this diving spot. The water was not very clear. Visibility was between 0.5 to 3 m, but beggars can't be choosers. Swimming to the west side of the divers staircase at a depth of 10 m at low water I found some poles, mostly upright, like a kind of mikado game.


I don't think these poles are part of the 'Sepiaproject' of Joop and Felice Stalenburg. They are two Dutch divers who tie tree branches together in the form of a shack. They place these shacks on the bottom; the branches are hammered into the sand/mud to anchor the lot. Because of lack of other suitable substrate, this is a very effective way to encourage the cuttlefish ladies to drop their eggs on the sticks. Have a look at the photo's of Joop Stalenburg! 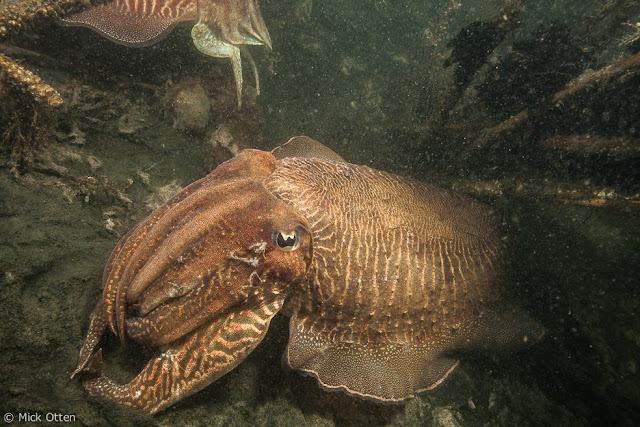 These poles were placed too haphazard, so I think they were put there by other divers. But they did their job: I saw a familiar zebra pattern appearing in the misty water. Sepia! Three specimens. At least one big male and a smaller female. They can grow to 50 cm (Lacourt & Huwae, 1981) and this male could have been that large. But human eyes can be deceitful (under water everything looks 1/3d bigger).
The third disappeared after a few minutes. He was smaller than the male and I think he was a rival. 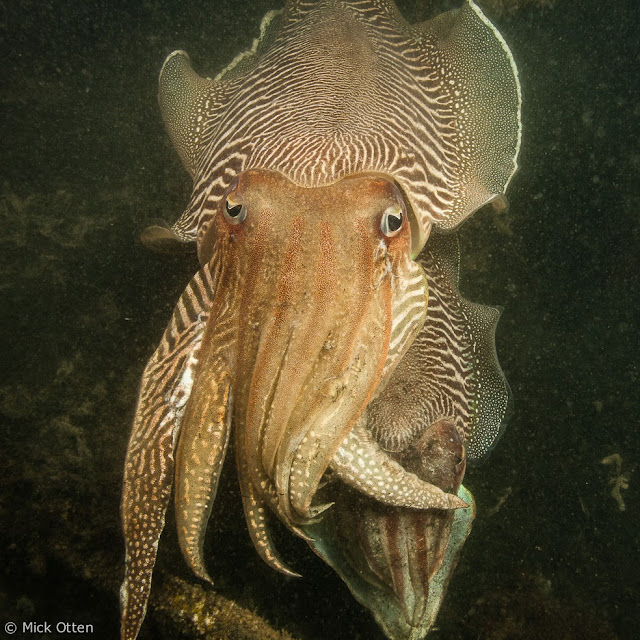 The male was very protective towards the female. He positioned himself between the female and the rival, as well as me. Well mannered towards the lady and clever in relation to its offspring. The better she is protected, the more eggs are glued to the sticks, the more of their sons and daughters will appear. 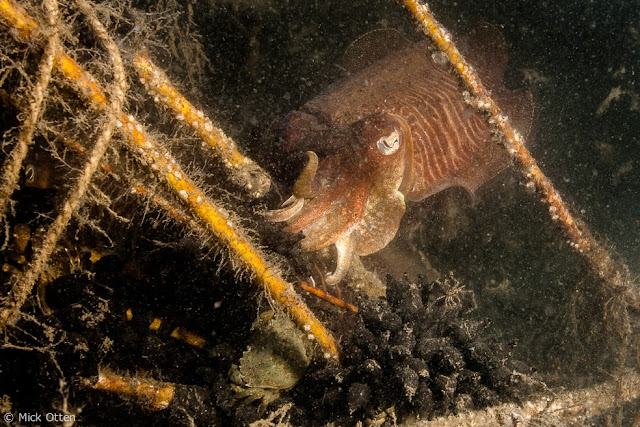 With some intermezzo's she was laying eggs. 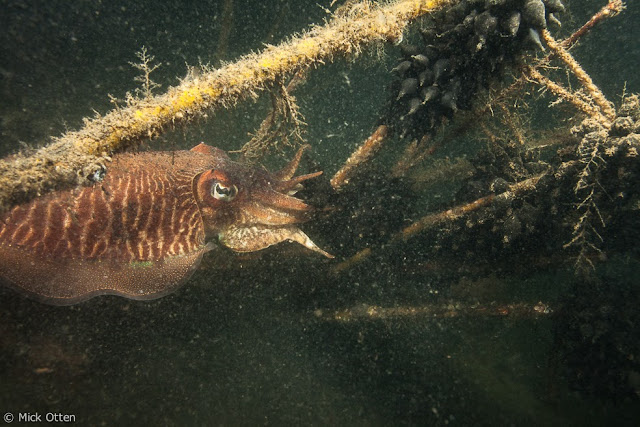 Naylor (2005): 'After the male has passed her a packet of sperm, she lays her eggs and dyes them with ink.' 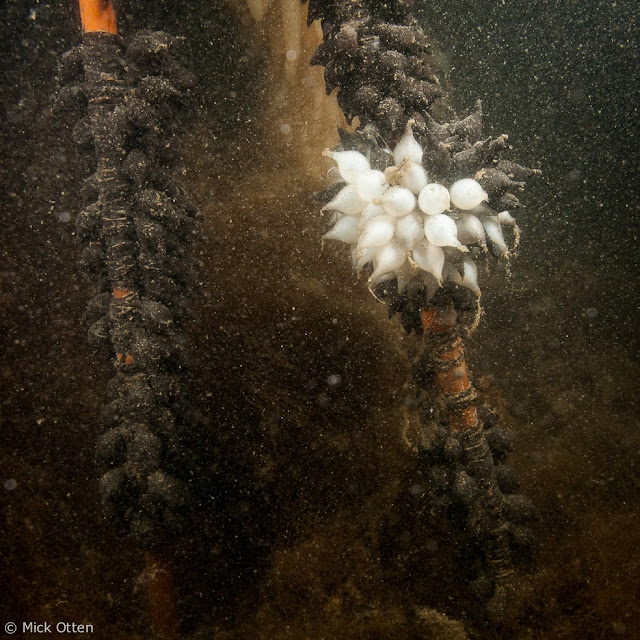 Has she ran out of ink? 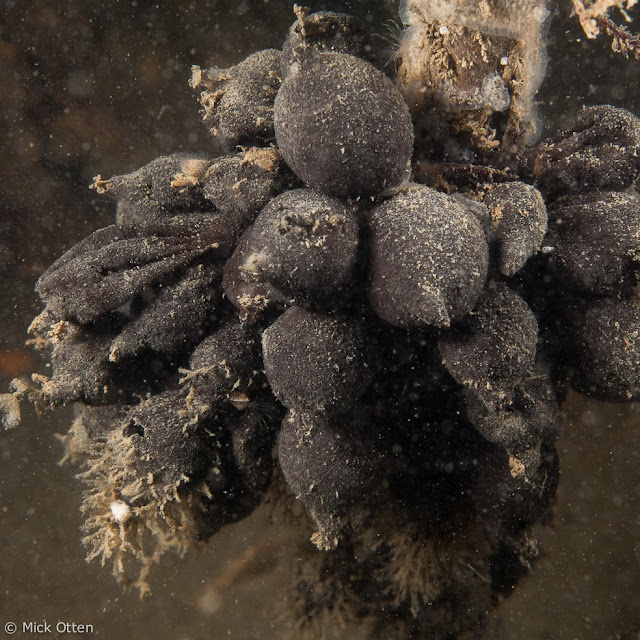 The eggs look like grapes or small black olives. Naylor (2005): 'The eggs hatch after 2 to 3 months. Females only breed once and die soon after laying the eggs. They do not take care of them.' 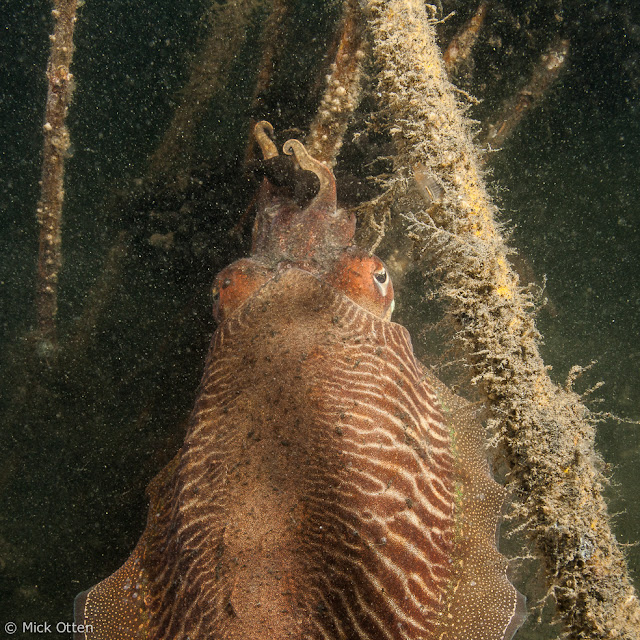 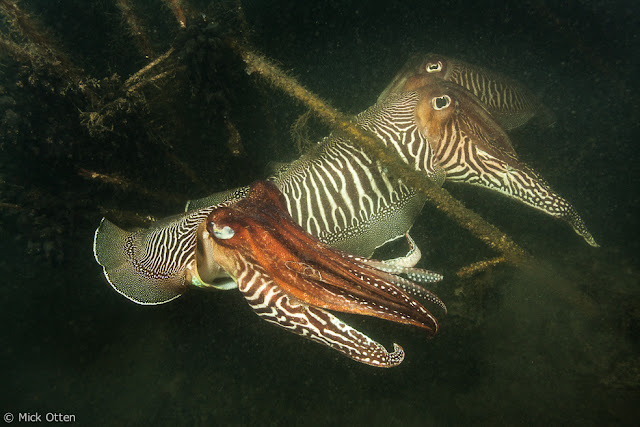 Then again two cuttlefish arrived on the scene. Both were males. They are quite easily distinguished. Have a look at the pattern and colour of the outer arms: the males show zebra stripes and at the end white dots. They emphasize the dots and zebra stripes in order to impress the ladies and warn of competitors. The outer arms of the females lack stripes and dots. 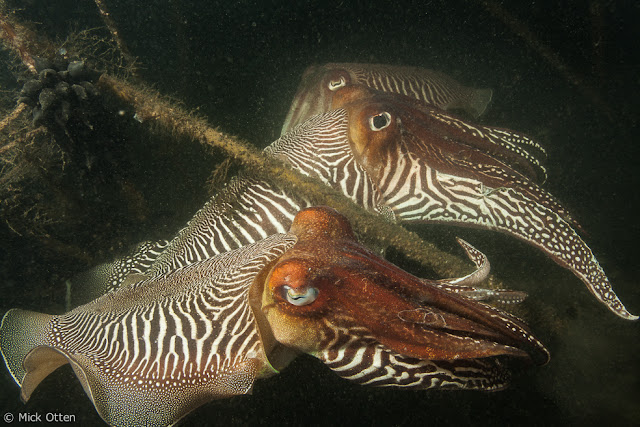 One swam away, the other approached the couple. And wanted to make an impression, hence the reddening of its head. But as said: the big male was very protective to his mate, so after a few minutes the contender decided to give up. 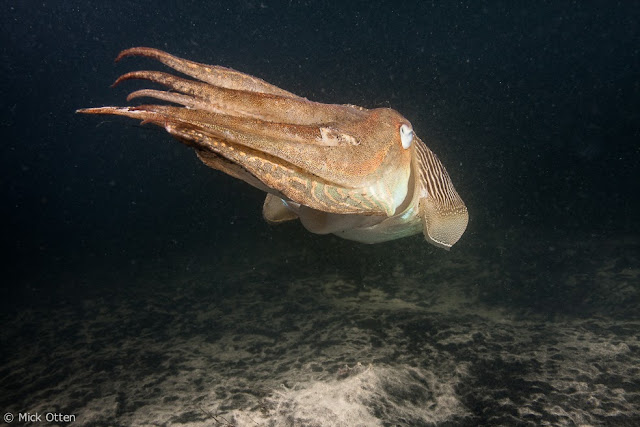 For me a good opportunity to take some photo's of a faster swimming cuttlefish. So I swam after him and was able to take some photo's, before he disappeared in the mist. They can swim forwards but if they want to escape, they use their jet propulsion (literally; they are the founding fathers of this propulsion system) and catapult backwards. 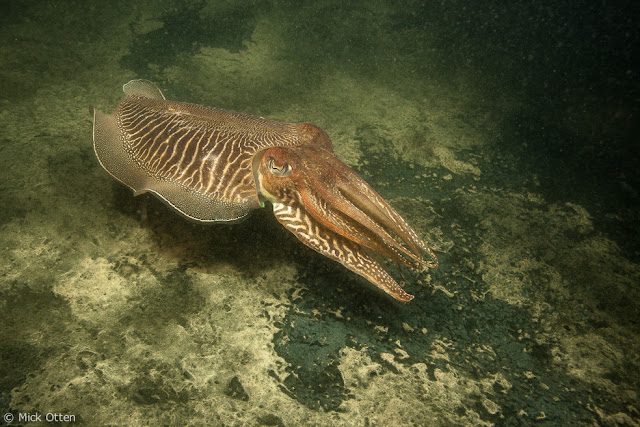 Cuttlefish hoovering above the earth? The grey substance is a mould that covers the muddy bottom, but with some imagination it looks like an aerial view.

It was also a good reason to relieve the couple from my presence and flashlights. It is pretty obvious they don't like flashlight. It appears to be like giving them a little knock on their head: they withdraw their 'head' a bit. However, I got the feeling they didn't seem to care after a while. But that could be because they were already a bit dizzy. 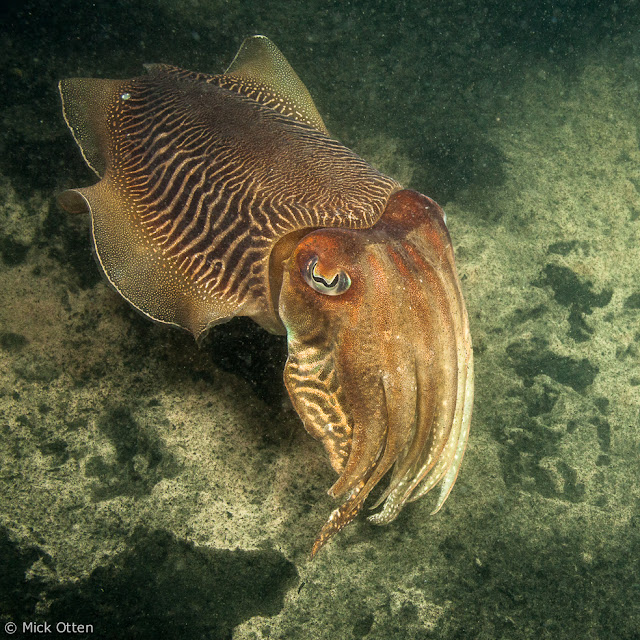