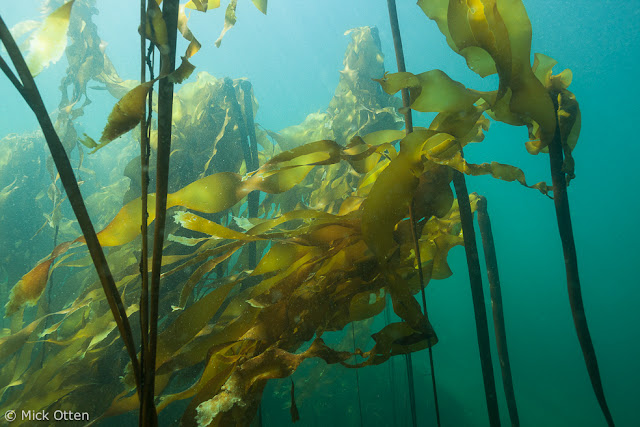 As I already wrote in my post of November 24, 2012: I always wanted to swim in underwater forests. 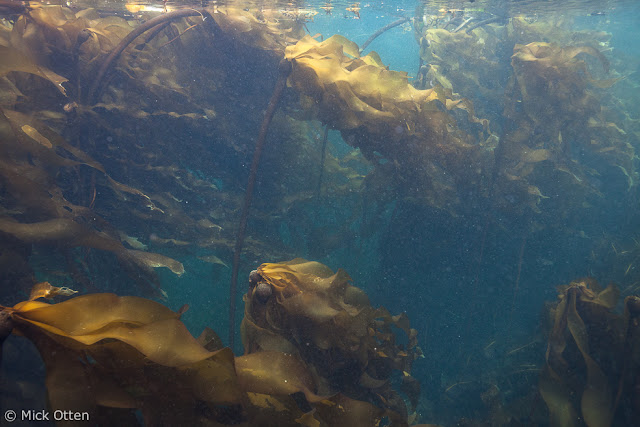 In the hot summer of 1976 I was on holiday with my parents at Minehead: a city at the south of England, situated at the Bristol Channel. My first encounter with marine life in the UK, after years in France (Brittany and the Boulonnais). What I did like – a lot – were the fields of forest kelp, Laminaria hyperborea and oarweed, Laminaria digitata, that appeared at (very) low tide. One minute all I saw was murky water, a few minutes later - like magic - I looked at hundreds of these Laminaria. An underwater forest! I wanted to swim in that forest. What kind of rare animals were waiting there to be found? It really triggered my imagination. 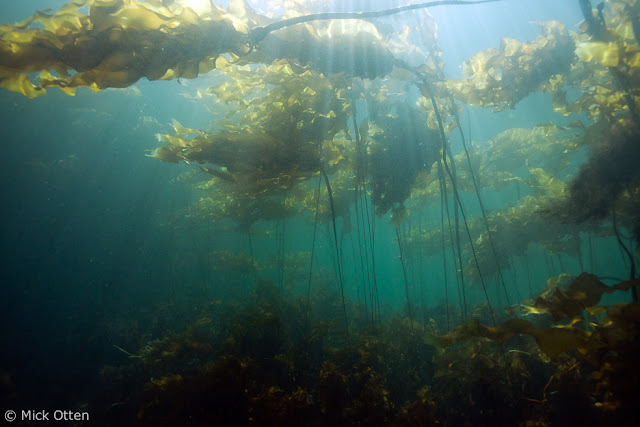 When I snorkeled in Brittany, South Africa, New Zealand and Canada I saw those forests, but still could not enter them. I was just floating above them. So when I got my PADI certificate the one thing on my wishlist was: swimming in those kelp forests. Looking ahead or up instead of looking down.


And however those dreams already did come true in Ireland (2011) and Brittany (2012), both still to be published, Vancouver Island was the epitome of my dream. I think it has something to do with size and dynamics. I love this strange, less known, underwater world. All these underwater photo's were taken at Rock Bay or it is otherwise mentioned. 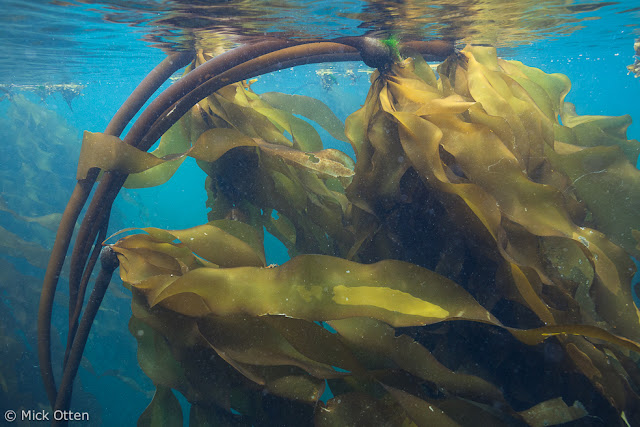 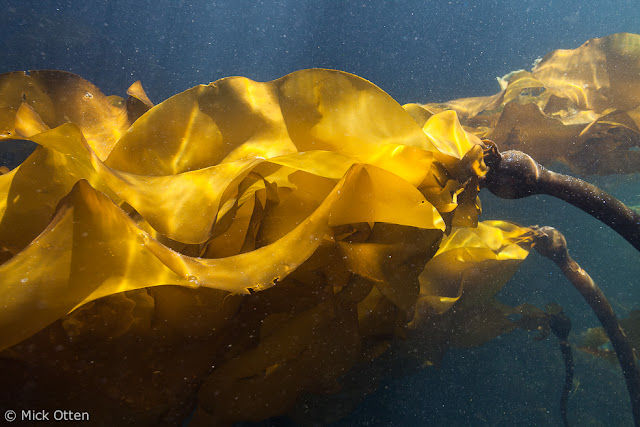 This dominant seaweed in the waters around Vancouver Island is Nereocystis luetkeana, bull kelp or bullwhip kelp (all the photo's in this post). I still don't know where the name bull kelp derives from. See  my earlier post about Nereocystis. 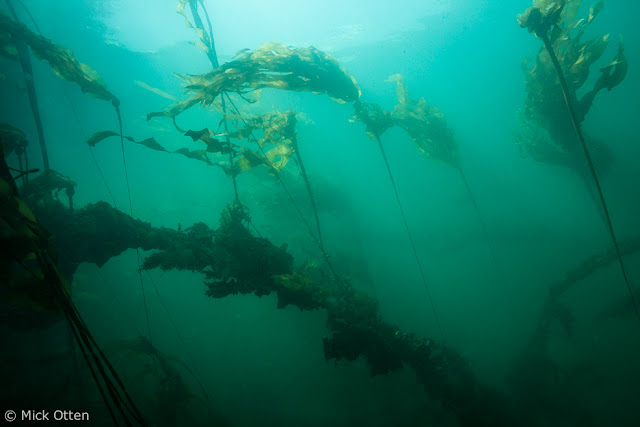 I was impressed by these seaweeds towering above me. It grows annually to 36 m long - the total length of the stipe and blades - and reaches this size already by June! It can be found from shallow subtidal to 20 m deep.

The kelp forest was not very dense, so it was easy to swim through and around. Far from being as agile as a seal or otter swimming in these forests, it was exhilarating to wander through them, to observe this strange world. 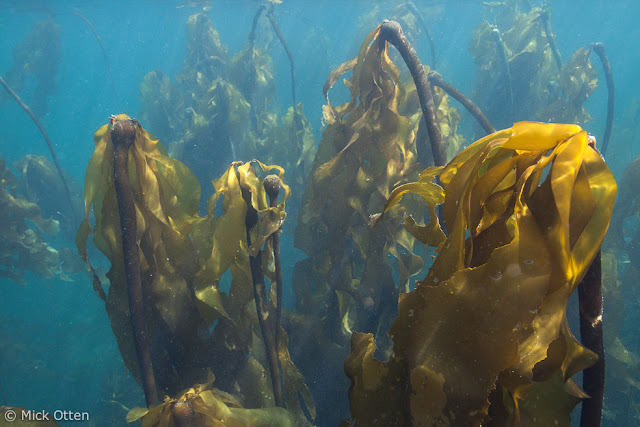 When there is no current, the blades hang down like a flag on a windless day. It is only for a short while: there is a very strong current in the Johnstone Strait (the small stretch between Vancouver Island and East Thurlow Island). So most of the time, the blades hang horizontal. As I did sometimes as diver. Holding tight; sometimes I had myself anchored at the pontoon. Fortunately: if you stay near the bottom the current seems less powerful. 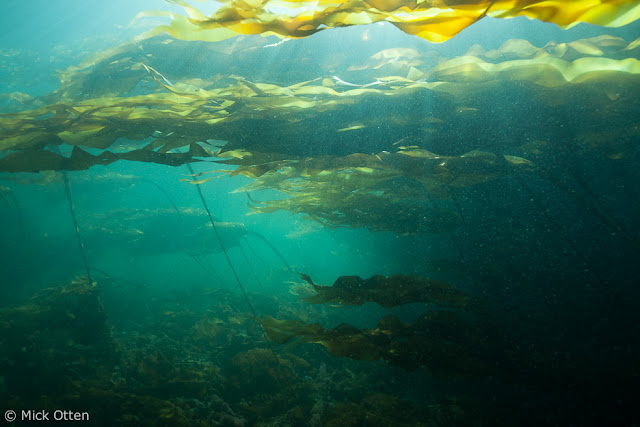 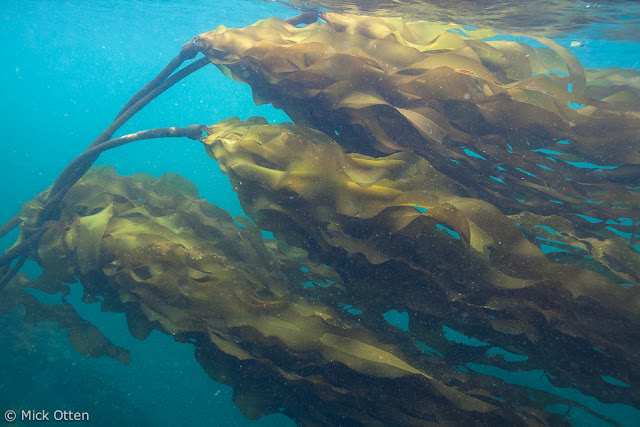 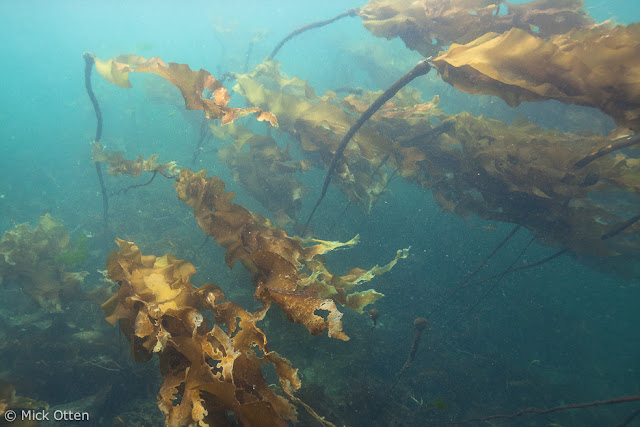 At some times the strength of the current changed in half a minute from almost none to unbeatable. You get a very good signal: once the blades of the kelp are moving horizontally, brace yourself, get down or out.

So I stayed in the bay, keen not to swim too far. Because not only the current can be dangerous, it gets more than 100 m deep and I saw a few big whirlpools... The deepest dive I made at Rock Bay was 13,4 meter. 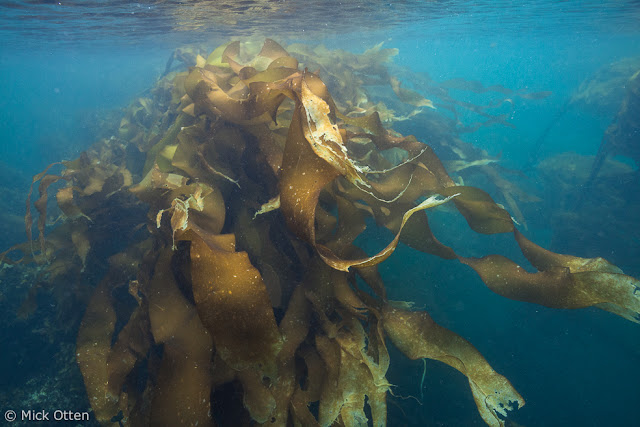 I think these kind of brown seaweeds, like Nereocystis and Laminaria, need heavy current, otherwise the mucus they secrete will build up and they will rot and die. I noticed quite a lot of tiny slimy threads, that made the water hazy: the mucus of bull kelp. 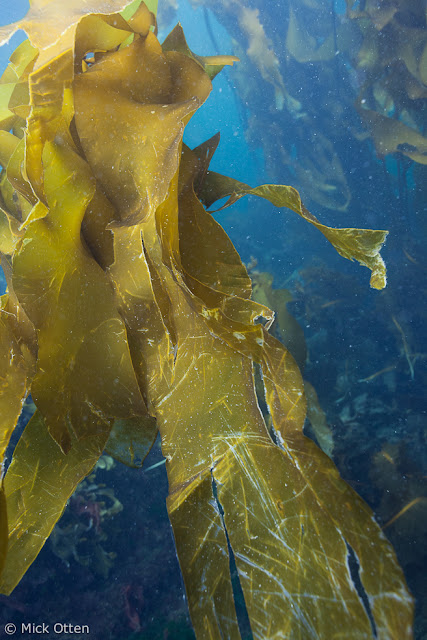 Heavily scarred: the current and waves batter this seaweed. 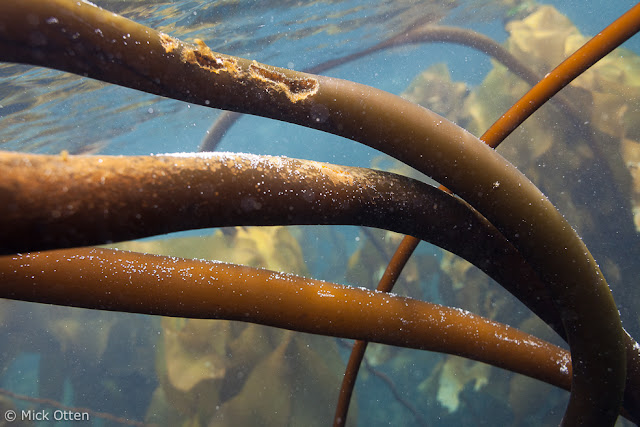 Deeper wounds. It could be caused by sea urchins feeding on this weed, but more probable by an outboard motor of a boat. 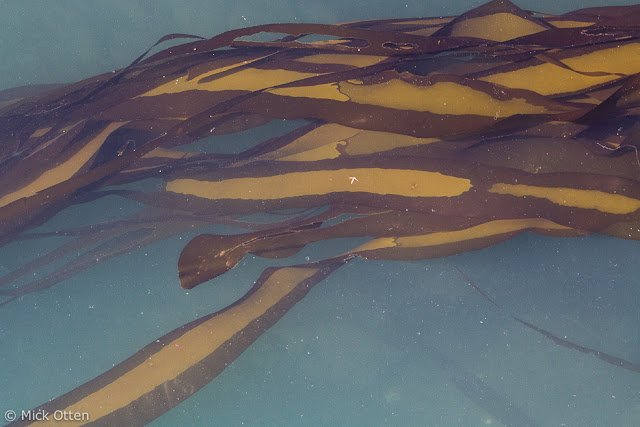 I found this strange discolouration of bull kelp at Sooke. It looks like seaweeds that have seen to much fresh water. 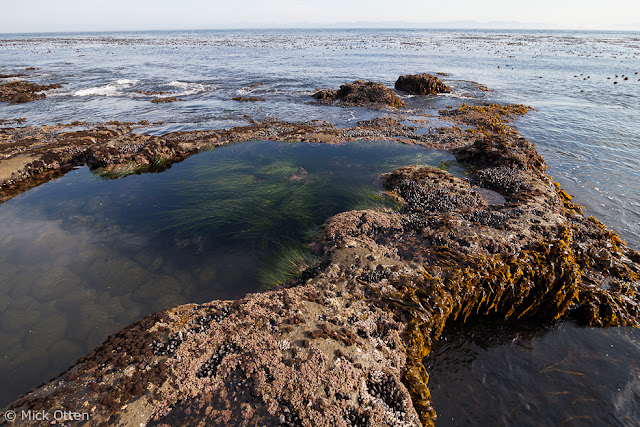 Bull kelp functions in a lot of places like a break wave. Like the 'small' strip of weeds at the top of the photo, here at Botanical Beach at the west coast of Vancouver Island, where the exposition is much greater than at the east coast.

Kelp forests are also an excellent hiding place for crabs and fish. And source of food for sea urchins for example. So it is a vital component of this coastal ecosystem. 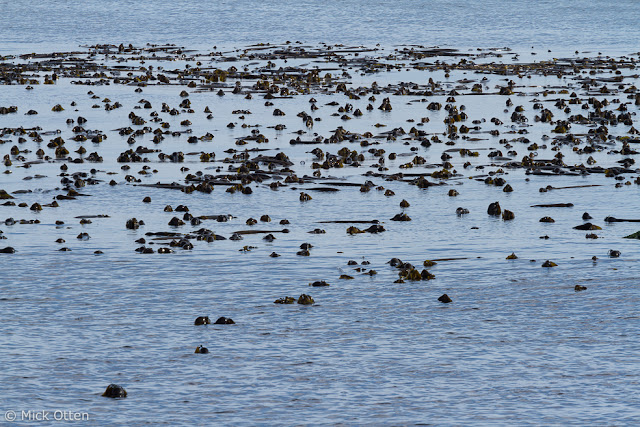 At low tide the pneumatocysts, the flask shaped objects, appear from nowhere. The first ones I saw gave me the impression of seals. 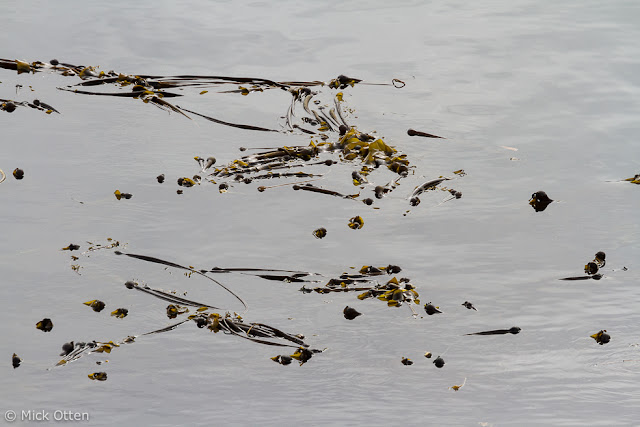 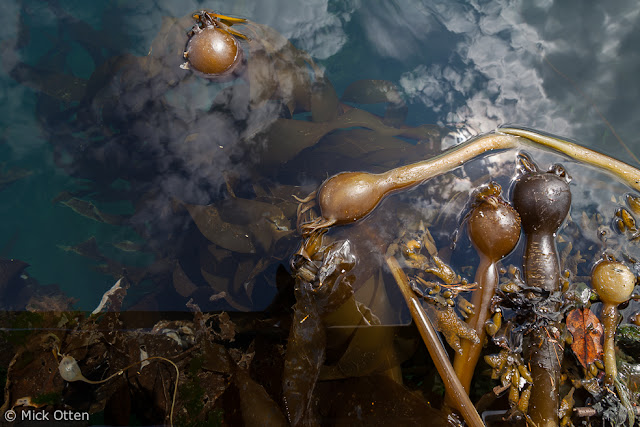 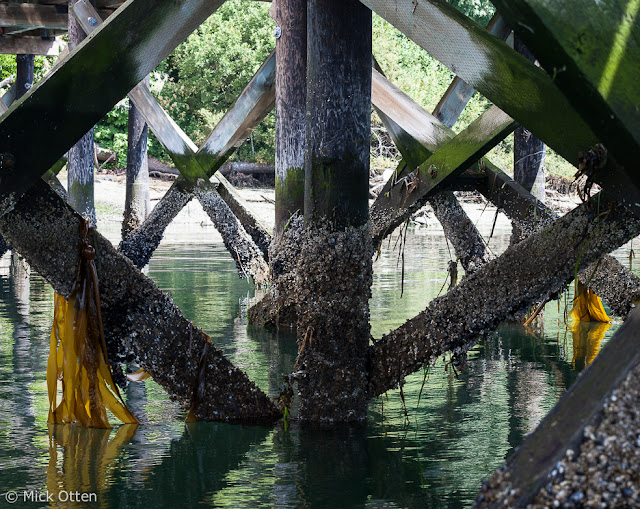 Bull kelp hanging on the board walk of Sooke at low tide. Looking like a hanged giant octopus. 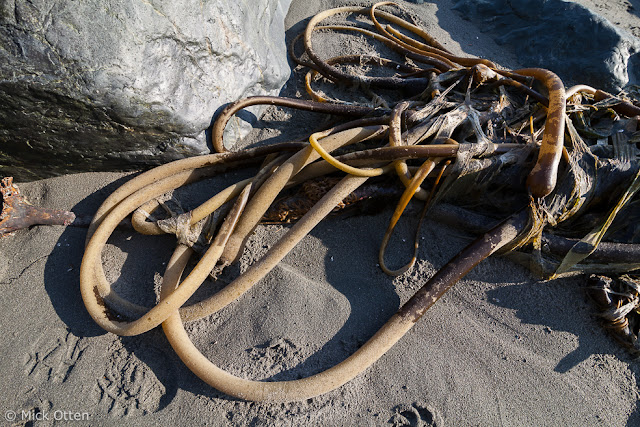 Stranded on the beach. Bull kelp is sturdy and tough. The holdfast (a root like structure with which it is attached to the rock) and stipe are strong enough to withstand the strong currents.... up to a certain point. 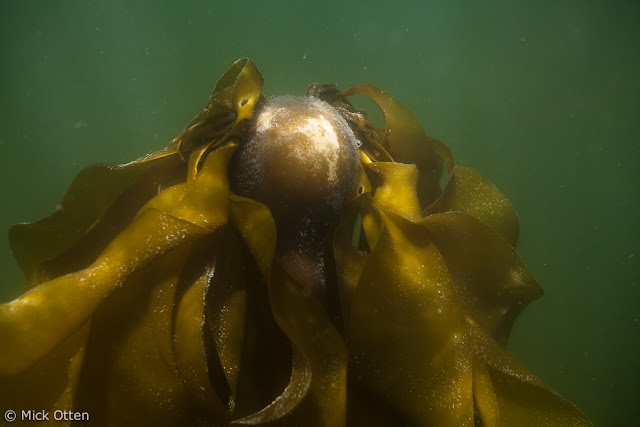 The water at Tyee Beach was cloudy and greenish. Near the beach the visibility was no more than 50 cm. Sometimes I felt something touching me. A bit unnerving. Then I saw 'out of the green' a kind of ghost appearance. Just bull kelp.

Do you recognize bald men that grow their hair too long at the sides? 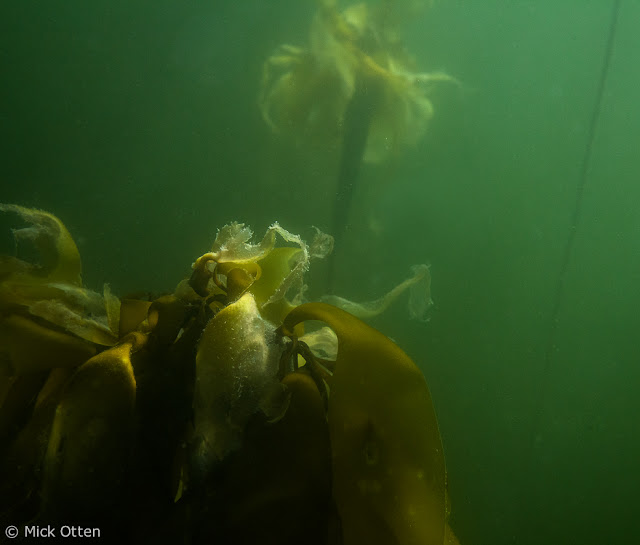 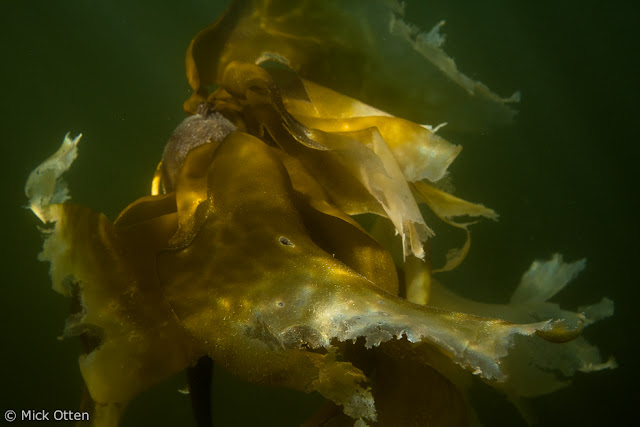 Look for strange shapes, for eyes, for monsters. And see the sunlight creating beautiful patterns.

I hope that you understand by now why I am intrigued by these cold water forests.
1 comment: Links naar dit bericht