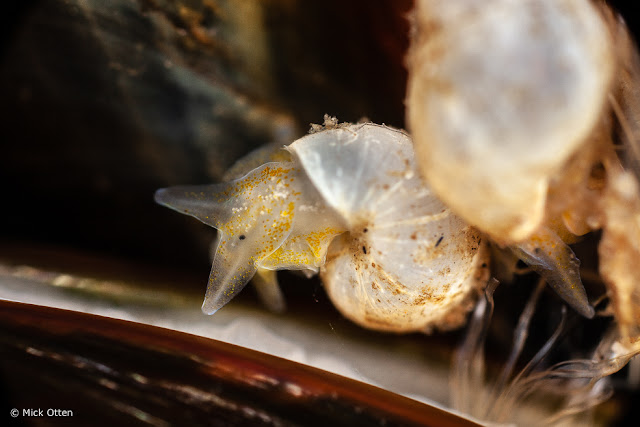 I googled for pictures of Odostomia scalaris, the former name of a little snail, now Brachystomia scalaris*. And what came up? Dozens of pages with carcasses. The first photo of a living specimen of this snail (at that search 81 pages later) is of the discontinued website of Marco Faasse. Why does it take so many webpages before finding one with a picture of a living animal? The answer is not too difficult: because shell collectors and (a lot of) malacologists prefer carcasses; they are collectable. I prefer the living being. Not only for its looks - isn't it a beautiful animal with its yellow-gold speckles? - but also for its behaviour as a parasite preying on Mussels.

Brachystomia scalaris, the Mussel pyramid snail, is a tiny snail with a maximum size of about 4.5 mm and 1.8 mm width, but often they remain smaller (fig. 3). In Dutch it is aptly called Mosselslurper, translated Musselslurper. Aptly because it predates mostly on Common mussels, Mytilus edulis (NL: Mossel). More about that later. 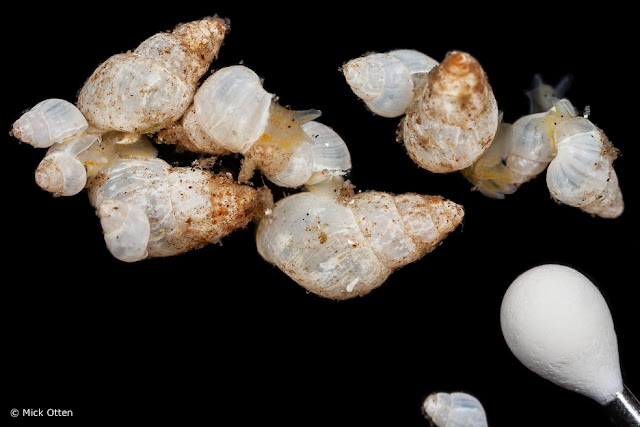 fig. 3  The size of a batch of Mussel pyramid snails, Brachystomia scalaris (NL: Mosselslurper)
compared to a pin-head with a diameter of 1.9 mm. Westkapelle, 14-7-2018 (in vitro).

The first time I saw one, was at a field trip with the Strandwerkgroep Waterweg-Noord to Westkapelle, the Netherlands, while turning stones at ebb tide. Marianne Ligthart, one of the participants, has eyes like a hawk and she found a few Mussel pyramid snails. The only thing I saw were some very tiny whitish dots... The next time we were at Westkapelle I tried to find one, but to no avail. She found them several times and another member of our group - also one with excellent eyes - found up to 10 specimens in one trip.

The first time I found a Mussel pyramid snail was at home in my aquarium. I had collected a lump of Common mussels at Den Osse-Nieuwe Kerkweg, the Netherlands, as food for the animals in my aquarium. When I took the lump out of the water to detach a few individuals, a few tiny shell particles fell off: Mussel pyramid snails! In a tiny lump I found more than 10 specimens of this snail between the byssus threads. Recently I collected a few lumps of Mussels at Westkapelle and again out of a fairly small lump I collected 13 specimens (all figures of the snail, except fig. 16).

Brachystomia scalaris belongs to the Pyramidellidae, a family existing of parasites preying on molluscs (snails and bivalves), worms, hydrozoans and echinoderms. It lives between the byssus threads of the Common mussel.

Byssus threads are extremely tough, strong, elastic threads that secure the Mussel to its substrate (fig. 5-8). They allow the Mussel to remain sessile in areas of high flow. Enlarged they look like fiberglass (fig. 6). The threads are deposited by means of a 'tongue' (fig. 8 & 9). This tongue, in bivalve shell terms usually called the foot, has a groove on the ventral surface which is continuous with the byssus pit. In this pit, a viscous secretion is exuded, entering the groove and hardening gradually upon contact with sea water. Maybe you don't realize how extraordinary this is: have you ever tried to glue something together that is wet?!

The byssal threads are also sometimes used by Mussels as a defensive measure, to tether predatory molluscs, such as the Dog whelk, Nucella lapillus (NL: Purperslak) and the Japanese oyster borer, Ocenebra inornata (NL: Japanse stekelhoren), that invade Mussel beds, immobilising them and thus starving them to death. A fate that could also await Mussel pyramid snails!

The snail feeds by extending its proboscis, a retractable appendage like the trunk of an elephant (fig. 9, 12, 14 & 15) and carefully sticks it between the open valves at the basal (under) side, where it reaches the soft part of the shell. There it sucks blood and tissue of the shell as food. They have no radula (rasping tongue) like most snails. Amazingly the Mussel does not close both valves in order to defend itself! If it did, the snail would loose its proboscis. 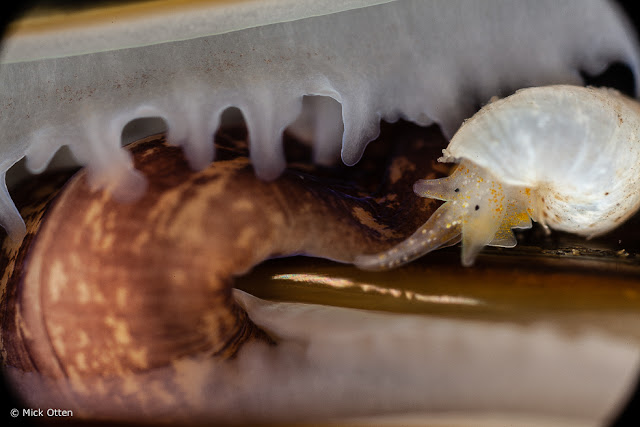 fig. 9  Mussel pyramid snail, Brachystomia scalaris (NL: Mosselslurper) with its proboscis extended.
Next to the snail you can see the tongue of the Mussel. Westkapelle, 14-7-2018 (in vitro).


I already mentioned Marianne Ligthart; in 2013 she sent me some photo's she took of the Mussel pyramid snail and on one of the photo's the snail extended its proboscis. That is what I wanted to see and to record on photo! It took some time and patience but as you can see at fig. 9, 14 and 15 I succeeded. 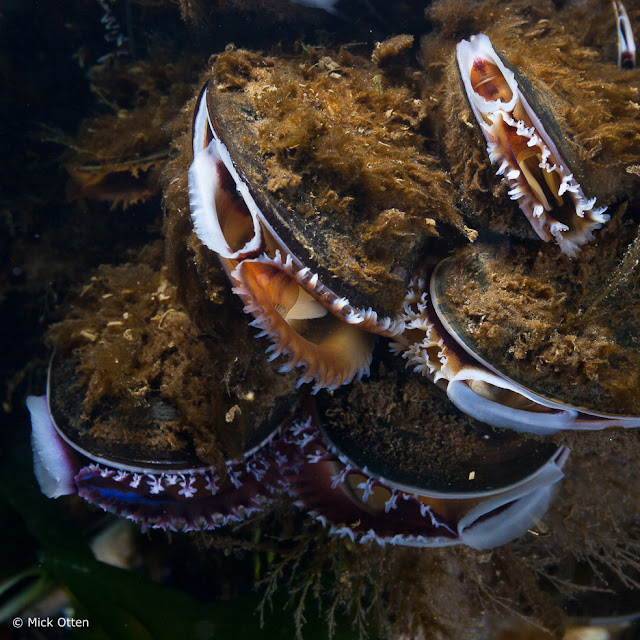 The incurrent siphon (opening) of Mussels is adorned with fringes (fig. 4, 10, 11, 13-15) to keep out alien life forms and any kind of particles, except plankton on which they live. Why are these fringes not ‘active’ when a snail is entering you with a snout and eating you? I wondered if the Mussel pyramid snail is clever enough to use the fringeless and less protected excurrent siphon (fig. 11), but Van Benthem Jutting (1933) after Pelseneer (1914) describes it as sticking in its proboscis at the basal - incurrent siphon - side. 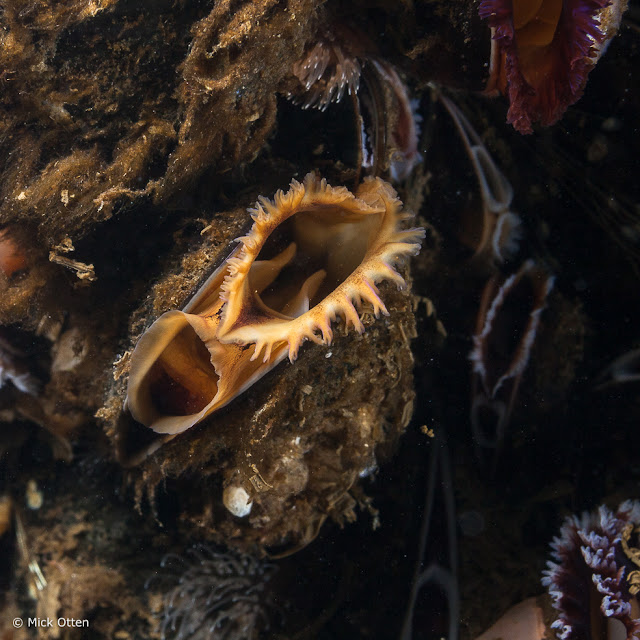 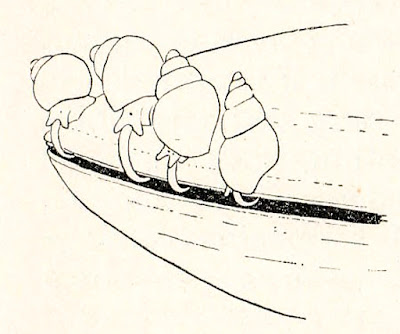 fig. 12  Illustration from Mollusca from Van Benthem Jutting (1933) after Pelseneer (1914)
showing several Mussel pyramid snails feeding alongside each other.

Van Benthem Jutting (1933) shows an illustration of Pelseneer (1914) (fig. 12) of an often recorded behaviour of Mussel pyramid snails feeding alongside each other. Have a look at this funny illustration: snails eating like pigs at a trough. 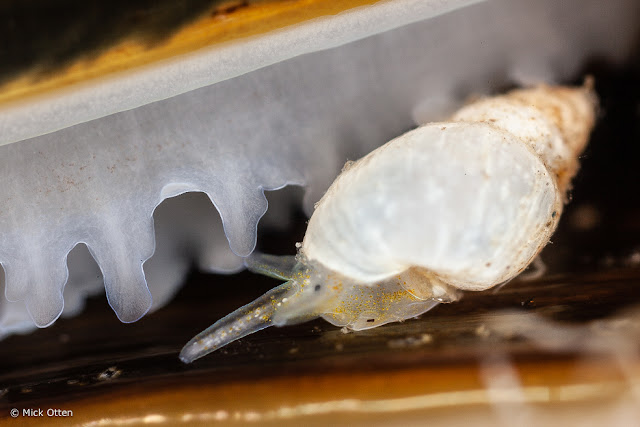 As already mentioned and can be seen at fig. 13 to 15: the proboscis is an extendable appendage. The snail is probing a Mussel and extending its proboscis. The white 'curtains' are the fringes of the Mussel.

I always thought this species to be quite rare in the Netherlands. The first native specimens were recorded in 1951 and since then they were often discovered, albeit more dead than alive. Two records in the Centraal Systeem of the Strandwerkgemeenschap (a databank of amateur and professional marine biologists) attracted my attention. Both are mentioned in articles in Het Zeepaard. The first one is the discovery of 113 specimens in total at Ameland on 21, 22 and 28 December 1976 (Adema, 1978). It is not mentioned but I expect they were empty snail-shells. The second one is a find of about 75 living specimens at De Heerenkeet on 21 October 1982 (Slager, 1984). Not only these records but my chance findings at Den Osse and Westkapelle show that they must be quite common, at least locally. Above all they are easy to overlook…

Literature & weblinks
*Why did I not google for Brachystomia scalaris? I did. The first searches produced websites with only some kind of snake!